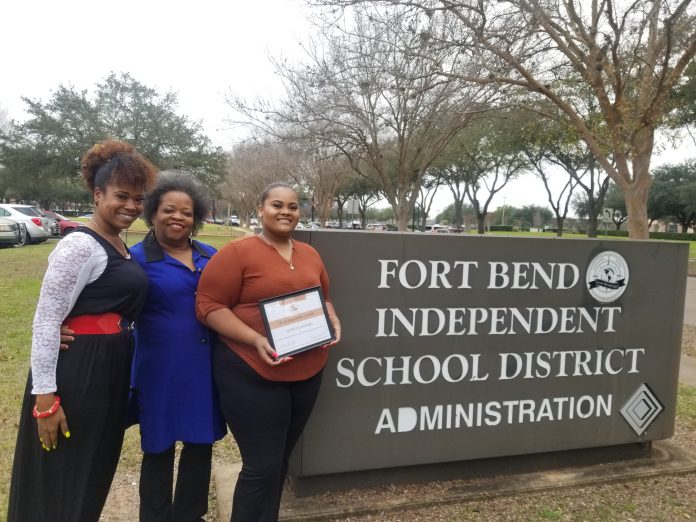 A Fort Bend ISD teen is being honored for trying to “keep the peace” among her peers while subsequently being disciplined by her school. It’s a glaring contrast that activist Tammie Lang Campbell, founder of the Honey Brown Hope Foundation, says is indicative of what is wrong in FBISD.

Nahyle Agomo was suspended from Thurgood Marshall High School after trying to deescalate a fight between fellow students. She says school officials told her that she should have found an adult, and then she was suspended for three days for “disruptive conduct.”

“My intent was to stop a pregnant student and her unborn child from getting hurt. The district ignored my intentions and wrongfully suspended me,” the honor student said.

“Fort Bend ISD refuses to hold their administrators accountable for not being onsite to deescalate the incident, but they insist on upholding the wrongful three-day suspension of an honor student who should have been praised – not punished,” Campbell said.

for her effort to bring about peace among peers.

“Even though the district will not remove the suspension from my record, the outcome is better because of The Honey Brown Hope Foundation’s help to not only have my side of the story added to my official record, but also because of them giving me the Peacekeeper Award,” added Agomo.

Despite the study, FBISD Superintendent Charles Dupre disputes any disparities, saying during an earlier interview that schools across the country struggle with racial gaps in discipline and larger trends and patterns found in his district do not equate to wrongdoing or discrimination on the district’s part.