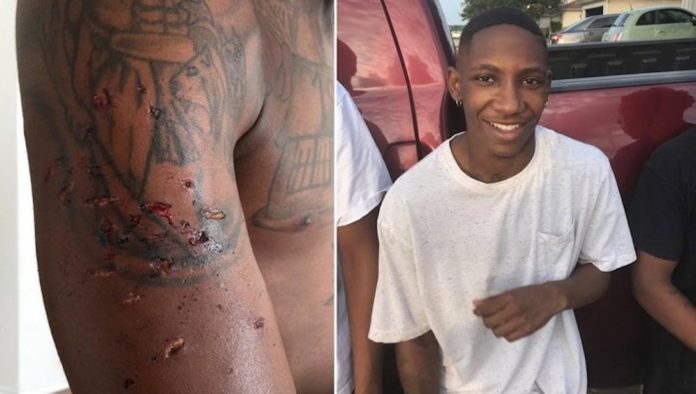 A Texas law enforcement supervisor is defending the actions of a white constable seen in a viral video confronting a young black man, who said he was later tasered and attacked by a police dog.

“I don’t believe our officers have done one thing wrong at all,” Harris County Constable Administrator Alan Rosen told reporters at a Wednesday press conference.

“What I have seen thus far is falsities – untruths,” Rosen said. “He has not been truthful about anything.”

Rosen was referring to allegations made by 20-year-old Marlin Gipson, who is filing a civil suit against the constable’s office.

Earlier this week, Gipson released cellphone video he recorded on July 18 showing an officer confronting him in a residential neighborhood in Houston as Gipson handed out business cards for his lawn-mowing business. The officer can be heard on the video telling Gipson he is investigating what the man is doing.

“I’m trying to make money,” Gipson, a business student at Blinn College, can be heard saying in the video.

When the officer asks Gipson for his name and date of birth, Gipson provides the information (police say he gave the wrong date of birth) and asks the officer for his identification. The officer ignores the request and says, “Tell you what, just turn around and put your hands around your back.”

“For what,” Gipson asks.

Other people on the video can be heard accusing the officer of harassing Gipson because “he’s black.”

The officer cannot be heard on the video stating why he is attempting to arrest Gipson and it ends as Gipson backs away from the scene.

“I was scared of what might happen next so I backed up slowly and started heading home,” Gipson wrote on Youcaring.com, where he’s raised nearly $20,000. Gipson hopes to put the money toward lost wages for his business, as well as medical, education and legal bills.

The video ends with Gipson going inside and locking the door.

The young man claims officers later entered the residence, broke down the bathroom door, tasered him twice and released a police dog on him.

“I can’t even lift certain stuff no more,” Gipson told CBS News of the injuries he allegedly sustained from the police actions. “My arm is still numb in certain spots. I can barely lift it up.”

Police charged Gipson with evading arrest and failing to identify to an officer.

Gipson’s video has since gone viral, prompting outrage among those who believe the constables actions were inappropriate and over the line.

Rosen told reporters that recent burglaries in the neighborhood prompted his officer to approach Gipson. He said the youth “raised his suspicion” when he was not forthcoming with information.

Rosen also defended the officer for not providing his name to Gipson.

“We don’t let a violator dictate the rules,” Rosen said.

After Gipson was arrested, authorities allegedly discovered he had an outstanding misdemeanor warrant. It is because of that warrant, Rosen said, that Gipson was uncooperative and resisted arrest.

Lee Merritt, who is preparing a civil rights lawsuit on behalf of Gipson, has accused authorities of launching a smear campaign against his client.

“No system you run his name through produces a warrant … repeated docket searches have produced nothing,” Merritt wrote in a Thursday Facebook post. “Despite the, now routine, smear campaign, Marlin Gipson has no criminal record. He has never been convicted of any crime whatsoever.”

Merritt says his client is a victim of racial profiling and excessive force.

“I think anytime you turn something you claim is racially motivated, that sensationalizes things,” Rosen said.

According to The Houston Press, Gipson’s family has filed an internal affairs division complaint with the constable’s office.