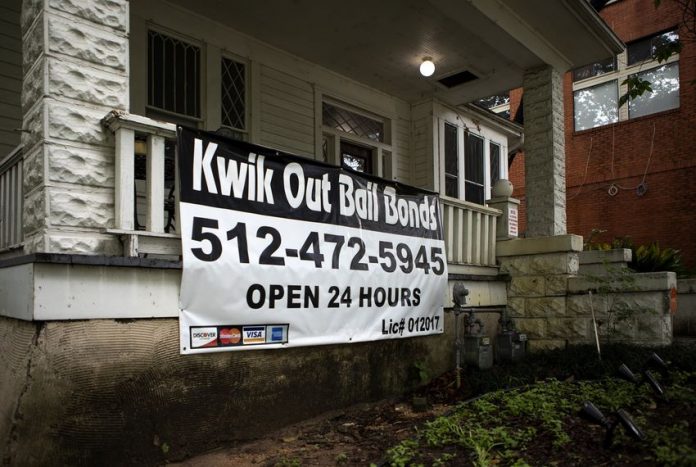 The Texas House gave an initial stamp of approval Thursday to a bill that addresses bail practices, which courts recently deemed unconstitutional in the state’s two most populous counties for discriminating against poor criminal defendants who can’t pay for their release from jail.

But a last-minute amendment actually limits who can be released from behind bars without having cash.

Reform advocates have called for a system that could get poor, nonviolent defendants out of jail before their trial, but the amendment by state Rep. Oscar Longoria, D-Mission, is more restrictive than current law on no-cost releases. It would not allow judicial officers to release defendants on no-cost bonds for numerous reasons, including if they haven’t shown up to a court hearing in the previous two years, were charged with a violent offense or were charged with a crime that involves more than 4 grams of a controlled substance.

House Bill 2020 was one of several bail reform measures filed this year after federal court rulings, jail deaths and a state trooper’s murder drew attention to Texas’ pretrial jailing practices after the last legislative session. As it was presented to the chamber, the bill would have required officials to consider a defendant’s risk of danger or skipping court before making bail decisions. The successful amendment nixed that requirement if a defendant is released on a preset bail amount.

The bill’s author, state Rep. Kyle Kacal, R-College Station, said he worked in coordination with Republican Gov. Greg Abbott‘s office on the measure, but it has changed significantly since it was filed in March. One of the most notable revisions before coming to the floor was that it no longer puts the power over systemic bail changes under the governor’s office. A spokesman for Abbott did not respond to repeated requests for comment on the bill.

The measure needs a final vote Friday before it can move to the Senate for consideration.

Calls for reform in Texas have grown louder as successful legal challenges to bail practices expand across the nation. In many counties, judicial officers set a bond amount, based on the criminal charge, that arrestees must pay in order to be released from jail before trial. But some cities, counties and states are veering away from cash-focused bail systems. Instead, they are leaning toward making pretrial jail release decisions based on an arrestee’s risk level and pushing for release of low-risk defendants on no-cost bonds.

The goal is often to prevent poor, nonviolent defendants from being kept in jail simply because they can’t afford their bail bonds while similar defendants with more financial resources walk free. Abbott also entered the debate last year after a state trooper’s murder, but his proposal focused on making it harder for dangerous defendants to get out of jail. Kacal’s bill is named in honor of Texas Department of Public Safety Trooper Damon Allen, who was gunned down in a 2017 traffic stop. The man suspected of killing him was out of jail at the time on a $15,500 bond after allegedly assaulting a sheriff’s deputy.

The bill also calls for increased training for some judicial officers setting bail.

“Decisions on setting bond are incredibly difficult, and they carry with them life-altering consequences that affect the safety of all Texans,” Kacal told House members Wednesday. “The Damon Allen Act seeks to address these difficulties in two main ways. First, it will increase the qualifications of magistrates. Second, it will equip magistrates with tools and data they need to make safe, fair and informed decisions.”

Longoria’s amendment drastically alters the bill, but he emphasized that the move to restrict release for defendants on personal bonds — which have no upfront cost — for some defendants was based on safety, noting that it limited no-cost release for sexual assault and family violence offenses.

“It was more of a community safety issue,” he told The Texas Tribune after the bill passed. “A lot of judges don’t have the proper training to basically admonish the defendants and set proper bond.”

The amendment went against what many advocates have pushed for, and Marc Levin with the Texas Public Policy Foundation, a conservative think tank, said he would push to have the Senate remove it if the bill finally passes the House.

Some bail reform advocates have also criticized the bill for still relying on money bail instead of presuming release on no-cost bonds for nonviolent defendants. At a hearing last month, the criminal justice advocacy group Texas Fair Defense Project claimed the bill at that time didn’t adequately address federal court rulings that called for individual bail hearings within two days of arrest and said Harris and Dallas counties’ bail practices kept people in jail simply because they were too poor to pay their bonds. The organization also said the bill’s requirement of a risk assessment would prohibit judges from automatically releasing from jail most misdemeanor defendants on a no-cost bond. Newly elected judges in Harris County adopted that practice amid legal woes the county faced from the federal ruling.

“We would like to see … that they’re still allowed to make a decision to automatically release defendants on really low-level, nonviolent offenses,” Emily Gerrick, a staff attorney for the organization, said at the hearing.

Amendments to allow counties to release defendants on no-cost bonds before a risk assessment and to address the court rulings that called for individualized bail hearings failed Thursday.

Others have raised concerns about risk assessment tools producing biased results toward people of color, claiming some criminal history factors used in the tool may perpetuate existing racial inequities in the criminal justice system. An amendment added to the bill Wednesday would require the statewide tool to prove it is unbiased and allow counties to modify the tool if there are related concerns.

Kacal’s bill would also create a temporary Bail Advisory Commission to establish a risk assessment tool for counties that would evaluate how likely a defendant was to skip court or pose a threat to the public.

The bail commission would create best practices and recommendations for counties making bail decisions, and it would collect data on pretrial release practices statewide. The commission was originally set up as a program within the governor’s office, giving Abbott power over the tool and recommendations. But it was later changed to be housed under the judicial branch with members appointed by the governor and other state leaders.

The governor’s appointees would include someone from law enforcement, a criminal defense attorney and a prosecutor. An amendment was added Wednesday to also include a representative from the bail bonds industry, which has opposed the legislation and the use of risk assessments. Bail bonds companies collect from defendants or their loved ones a nonrefundable percentage of bond amounts and then front the remaining amount of bail in order to get a person released before trial.

The bill as passed by the House also would require a judicial officer who makes bail decisions in felony and some misdemeanor cases to undergo at least four hours of relevant training. And it would require a defendant’s criminal history, including family violence, and the safety of law enforcement, to be considered when setting bail.

The House Criminal Jurisprudence Committee also heard related legislation — including identical reform bills filed by Sen. John Whitmire, D-Houston and state Rep. Andrew Murr, R-Junction, who have worked with judges, lawyers and other stakeholders on the issue for years — but it was not put in front of the entire chamber for debate. Murr’s bill originally included a risk assessment as well but was later changed to focus only on allowing judicial officers to deny bail release altogether if they deemed it was necessary to ensure court appearance or public safety.

Another bill heard in committee would have addressed recent federal court opinions against Harris County practices, requiring individual bail hearings within 48 hours for those who claim they can’t afford their initially set bail amounts.