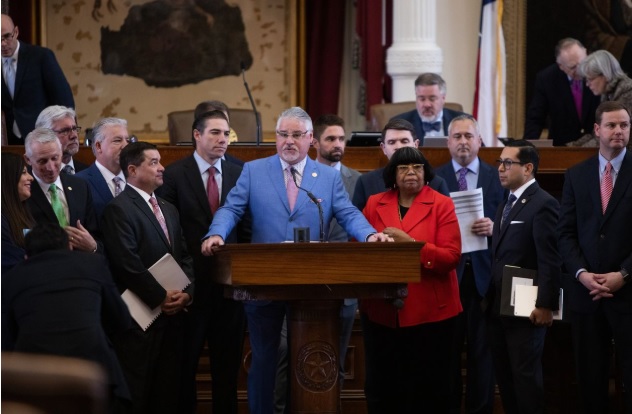 After more than three hours of discussion, the Texas House nearly unanimously passed a comprehensive bill to reform the way schools are funded and slow the growth of property tax bills.

House Bill 3 would increase base funding for each student by $890, fund full-day pre-K for low-income 4-year-olds in most school districts, compress tax rates for all districts and reduce the amount of money wealthier districts pay the state in recapture payments to shore up poorer districts. It now would also provide across-the-board raises for all full-time school employees who are not administrators, after Democrats spearheaded a change in the bill.

“We are finally reforming public education in Texas, and not by court order, so that’s a pretty important thing,” said the bill’s author, Rep. Dan Huberty, a Republican who chairs the House Public Education Committee. The vast majority of House lawmakers signed on to the bill as co-authors. Rep. Jonathan Stickland, R-Bedford, was the lone no vote.

The bill will now make its way to the Senate. The upper chamber last week increased the amount it had planned to set aside for public education and property tax reform to match the House’s original proposal. While House leaders have pitched a single comprehensive school finance bill and edited it over time, the Senate has taken a more winding path to legislating on this issue.

One key sticking point between the two chambers: teacher pay. The Senate has approved a bill proposing $5,000 across-the-board raises for Texas teachers. The House has advocated for more flexibility for school districts in teacher salaries, though the bill was amended Wednesday to give all school employees pay raises of about $1,850, on average.

As originally proposed by Huberty, HB 3 would put $6.3 billion into public education and $2.7 billion toward slowing the growth of school district property taxes. It is unclear exactly what the new cost of the bill is, with the amendments passed.

Debate on the floor was largely civil and lacked a lot of the drama that usually accompanies business on such large pieces of legislation. Rep. Matt Schaefer, R-Tyler, a member of the hardline conservative faction of the House, needled Huberty on the floor over how exactly HB 3 would ensure tax bills wouldn’t balloon in the future, even while property values continue to skyrocket.

“There is real property tax relief in this bill, but my point is that I don’t see how it doesn’t get washed out very quickly,” Schaefer said.

Schaefer joined the vast majority of members in approving the bill Wednesday.

Many House lawmakers ended up withdrawing their amendments, including a couple of controversial ones to reduce funding for some charter schools and add a state-funded merit pay program.

The most notable amendment Wednesday, was the teacher pay raise provision filed by House Democratic Caucus Chair Chris Turner, D-Grand Prairie. It would require school districts to using some of the extra money they receive in the bill to give the pay raises. It appears to serve as an attempt to compromise on an issue that quickly became a fault line between the House and Senate on how to spend money on schools.

Until Wednesday, Republican House Speaker Dennis Bonnen has said he would prefer to give school districts flexibility on how to use additional funding and that he does not favor a key Senate proposal for $5,000 teacher pay raises.

“This is a sustainable way of providing increased compensation to our teachers and other employees,” Turner said Wednesday afternoon, explaining his amendment to his peers in the House. “It establishes a floor, but it requires every school district to spend at least 25 percent of its basic allotment increase on pay raises. They can go beyond that if they wish to.”

Lt. Gov. Dan Patrick, the Republican president of the Senate, has prioritized $5,000 across-the-board teacher pay raises over other measures to improve school finance, championing legislation that would do so starting during his January inauguration. That $4 billion piece of legislation, Senate Bill 3, passed unanimously out of the Senate last month.

Turner’s amendment would not add to the cost of HB 3, but rather mandate school districts to use a quarter of the additional funding they receive to provide raises for school district employees who are not administrators — with the majority going to across-the-board raises for full-time employees and the rest going to discretionary raises. This provision would apply any time the Legislature raises the base funding per student in the future.

The raises backed by the House would also go to support staff — costing about $2.4 billion, according to Turner’s office. The Senate’s proposed raises would be for teachers and librarians only.

Rep. Richard Peña Raymond, D-Laredo, had planned to propose a provision similar to the Senate’s that would give full-time teachers, librarians, counselors and nurses $5,000 pay raises. But he chose to pull it down and publicly support Turner’s amendment instead.

The Senate Finance Committee Wednesday voted out a version of its budget that also includes $2.3 billion for school finance reform — but the Senate does not have a clear plan outlined for how to deliver that money to schools. It also includes $2.7 billion for property tax relief, but it’s still unclear how the upper chamber’s proposal would apply, if at all, to school districts.