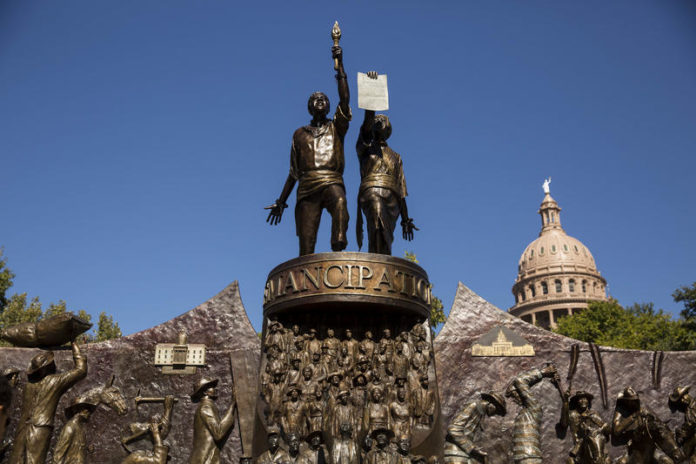 Texas unveiled a monument on Saturday recognizing the contributions of African-Americans to the state but the dedication on the State Capitol grounds was followed by verbal sparring between a White Lives Matter group holding a protest nearby and counter-protesters.

After the ceremony attended by state officials, including Gov. Greg Abbott, about two dozen individuals with a White Lives Matter group demonstrated against what they called the unequal application of hate crimes laws, which they say favor minorities. The group said it was a coincidence its protest was held at about the same time as the ceremony for the monument.

The White Lives Matter group was shouted down by a group of several hundred counter-protesters, who held up signs that said “Stand Against Hate” and “Black Lives Matter.”

Austin police and troopers with the Texas Department of Public Safety dressed in riot gear kept the two groups separated.

No arrests were immediately reported.

During the unveiling ceremony, Abbott told a crowd in attendance that the monument honors African-Americans who helped grow Texas.

The monument is located on the Capitol’s south lawn, close to other monuments that honor Confederate soldiers for their service during the Civil War.

The new monument features the African-American experience in Texas, from exploration in the 1500s to slavery and emancipation to achievement in arts and science.

It will be the 21st monument on the Capitol grounds and the second memorial dedicated to a specific ethnic group. Texas installed the Tejano Monument to Mexican-American history in 2012.