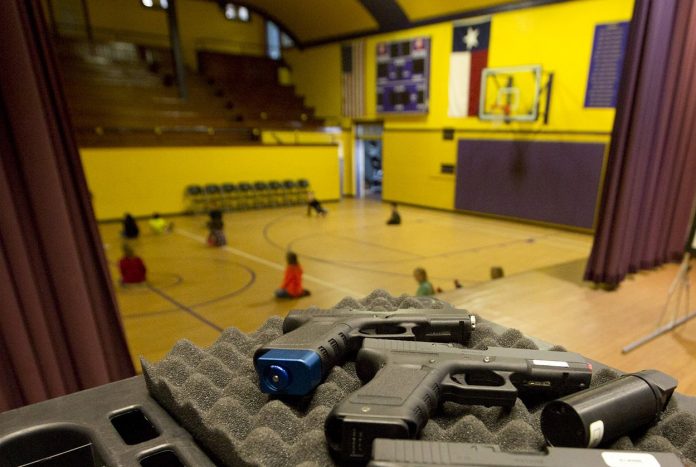 If Texas schools want to arm their staffs, they have two options. One is the marshal program, which Abbott proposed using state funds to help schools implement. It allows local school boards to authorize employees to carry a handgun on campus, but they must be specially trained and licensed by the Texas Commission on Law Enforcement. Under the program, armed school personnel can’t carry firearms around students.

The other option was already around when then-Gov. Rick Perry signed the marshal program into law in 2012. Created by Harrold Independent School District Superintendent David Thweatt in 2007, the Guardian Plan allows local school boards to determine training standards and authorize specific employees to carry on campus at all times.

Here are four things to know about the two existing plans that allow school districts to arm their employees:

The marshal program creates a new kind of peace officer

For districts that choose to adopt the marshal program, teachers and other school staff members who undergo the required training are taught to act as armed security officers — or peace officers — in the absence of law enforcement.

“The marshal program is about creating an entirely new class of peace officers — certified and [Texas Commission on Law Enforcement] trained — who can act in a moment of crisis to disable and neutralize an active shooter,” said state Rep. Jason Villalba, the Dallas Republican who authored the bill that createdthe Texas school marshal program Abbott wants to expand. “That’s why the program is so starkly different than what Mr. Thweatt calls the guardian plan.”

The Guardian Plan, on the other hand, lets school staff carry guns with or without marshal training. It doesn’t train school personnel as peace officers but lets them carry their weapons as long as they undergo district-specific training and have a handgun license. And it doesn’t have a maximum requirement for how many teachers can be armed, unlike the marshal program, which lets schools only designate one employee a marshal for every 400 students.

Despite the differences in approach for the two plans, they both aim to mitigate tragedies in the event an active shooter comes on campus grounds.

“That’s the reason we’re doing it, and I think we can do that because they’re not going to know from where our particular defense is going to come,” Thweatt said.

Rural districts are more likely to adopt one of the plans

More than 200 of Texas’ 1,000-plus school districts have adopted one of two programs. And a majority of those districts tend to be in rural communities, according to Dax Gonzalez, a spokesman for the Texas Association of School Boards.

“Generally speaking, districts with police departments … do not tend to allow staff to carry firearms,” Gonzalez said. “Those 217 are likely smaller, more rural districts that feel they cannot be serviced by local law enforcement quickly enough.”

Arguably one of the biggest differences between the two programs is different requirements for teachers or other employees who want to carry a gun.

Marshals have to receive 80 training hours and keep their firearms under lock and key. The Guardian Plan, on the other hand, lets teachers keep their firearm with them at all times — as long as they have a concealed handgun license and go through 15 to 20 hours of training.

It’s worth noting that these requirements could change, however. Abbott previously proposed streamlining the training course under the marshal program — which he called “burdensome”— and eliminating the lockbox requirement.

Villalba was critical of Abbott’s tweaks to the marshal program, saying that parents might be upset if teachers didn’t have to lock up their weapons.

But several Texas Republicans, including Jerry Patterson, Texas’ former land commissioner who helped get the state’s concealed handgun law passed in 1995, say the lockbox requirement does more harm than good.

“The lockbox requirement is silly. The gun needs to be carried on the person and accessible immediately,” Patterson said. “Not where you have to run to the office, go through a combination and then get the gun. If you carry it all the time, you won’t lose the weapon.”

Individuals schools and districts that adopt the Guardian Plan are also allowed to choose their own training requirements. At Harrold ISD, for example, employees who choose to carry go through at least 15 hours of training that includes videos of hostage scenarios and shooting drills. Fayetteville ISD, which adopted the plan in February, doesn’t require a specific amount of firearms training (though most staff do around 20 hours per year). And at Keene ISD, which adopted the Guardian Plan in 2016, Superintendent Ricky Stephens previously told The Texas Tribune he requires staff to undergo 80 hours of initial training and 40 hours annually after that.

Only one plan receives money from the state

To adopt either plan, districts have to find a way to pay for training, purchase firearms and ammunition and, in some cases, a lockbox.

But only the marshal program has received state funding to help pay for those expenses.

When the marshal program was first signed into law, the state had a grant program in place to help districts cover training costs. But that money ran out and funding has not been reauthorized. That’s why Abbott proposed that the state pay for school marshal training this summer to ease the burden on individual districts.

Funding for the Guardian Plan was notably missing from the governor’s proposal, however. Instead of getting approval from the Legislature, authorization for the plan is outlined under the Texas Government Code, which lets certain school district employees who have a handgun license to carry their weapon.

Since there’s no legislative recognition of the Guardian Plan, Thweatt said, districts that adopt the plan have to pay for it themselves. Thweatt said Harrold ISD reimburses employees who participate for the cost of guns, ammunition and training.

“I’ve never received any funding [from the state] for the Guardian Plan,” Thweatt said.