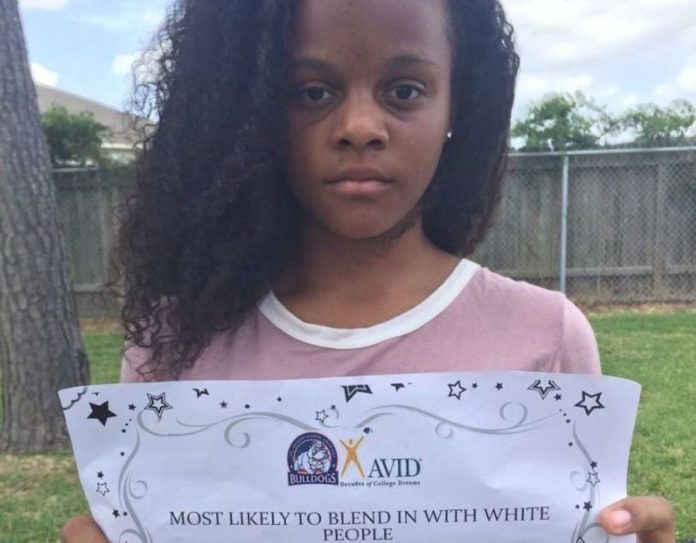 And the superlative awards are getting even more offensive.

Just days after a student received an award stating she was most likely to be a terrorist, another student was given an equally offensive award at the same school.

Sydney Caesar, a student at Anthony Aguirre Junior High School in Texas, received an award that stated she was “Most Likely to Blend in With White People,” from her college-prep teacher Stacey Lockett.

“Where is the common sense in that? I mean, how can you think that is okay to say it in the first place and then right after a major event has happened? It just doesn’t make any sense,” Caesar’s sister Lauren Easton told Fox 26 Houston.

“I feel really bad for her because I saw her in class, she was really upset about it and she just wouldn’t talk at all for the rest of the day,” says Caesar.

Sydney didn’t attend the last day of school because she was too embarrassed, and Sydney’s mother wants something besides a suspension.

“For that child to either be called a terrorist or she’s not black enough, basically now the students are taking that and that’s her label for the rest of the school year,” Latonya Robinson, her mother said.

The school system issued a statement about all of the mock awards that were given out:

“The Channelview Independent School District would like to emphasize that a recent incident where insensitive and offensive mock awards presented to students are in no way associated with the AVID College Readiness System or the AVID Center. Channelview ISD does not support this type of recognition under any circumstances and the placement of the AVID logo on these certificates was an error. At no time was the AVID program itself involved in this unfortunate incident.

The AVID System is an outstanding college readiness model that has led to continued high levels of student achievement in Channelview ISD. AVID’s system has benefited hundreds of thousands of students worldwide since 1984. Working together with the AVID Center, Channelview ISD’s AVID system provides intensive support to students with tutorials, positive peer groups, and college-readiness skills.

Channelview ISD would like to reassure the community that this incident does not reflect the many good things going on in our district. The district does not condone the incident that occurred and we are taking this matter very seriously.”

Apparently this teacher is both short on common sense and an actual sense of humor.