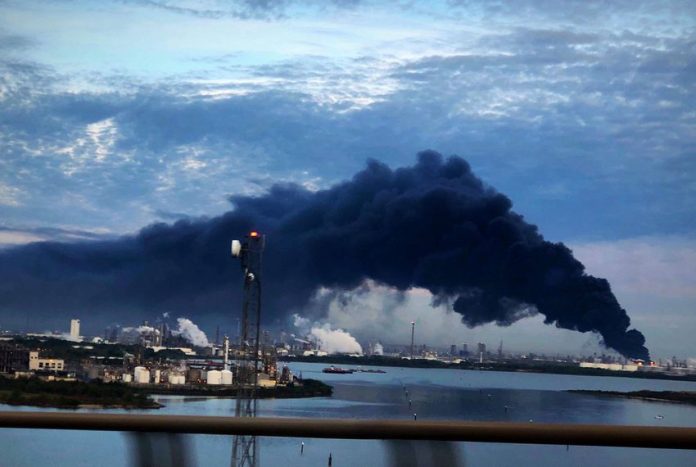 Late Friday, the state of Texas sued Intercontinental Terminals — the Houston-based company whose petrochemical storage facility in the suburb of Deer Park caught fire last weekend and burned for days, sending a dramatic plume of black smoke over the nation’s fourth-largest city.

The lawsuit, filed in state district court on behalf of the Texas Commission on Environmental Quality, alleges that air pollution released during the fire is a violation of the Texas Clean Air Act.

It seeks a permanent injunction and civil penalties that “could exceed $100,000.”

“The state of Texas works hard to maintain good air quality and will hold ITC accountable for the damage it has done to our environment,” Texas Attorney General Ken Paxton said in a statement. “ITC has a history of environmental violations, and this latest incident is especially disturbing and frightening. No company can be allowed to disrupt lives and put public health and safety at risk.”

Paxton’s statement noted that the cities of Deer Park and neighboring Galena Park ordered residents to stay indoors two separate times this week because of concerns about unhealthy air quality — and that those concerns also prompted Deer Park ISD and other area school districts to cancel classes for several days.

The lawsuit came as crews worked to contain another fire that broke out at two storage tanks at ITC’s sprawling complex on Friday and sent up another black plume of smoke — and just hours after TCEQ had announced that a dike surrounding the fire-damaged storage tanks had been breached, sending crews scrambling to contain runoff.

The first fire, which broke out Sunday morning and spread to more than a half dozen storage tanks, was extinguished on Wednesday.

Paxton’s statement said that the “TCEQ continues to monitor the air quality in the affected areas about 20 miles east of Houston.”

Later in the day, the agency announced it was working with a variety of agencies — the city of Deer Park, Harris County, the U.S. Environmental Protection Agency and the U.S. Coast Guard — to assess water quality near the site.

After the lawsuit was announced on Friday, TCEQ executive director Toby Baker thanked Paxton “for acting so quickly on TCEQ’s request to enforce against ITC.”

“Due to the dynamic, ongoing investigation of this incident, only air quality violations have been cited in the State of Texas lawsuit against ITC, LLC,” Baker said in a statement. “Any additional violations, including surface water quality, will be referred to the Office of Attorney General for civil enforcement as part of this action.”

Environmental groups were quick to cheer the lawsuit.

“Finally, the Texas government is acting with real force to hold a polluter accountable rather than slapping it on the wrist or looking away entirely,” Environment Texas Director Luke Metzger said in a statement. “The state should seek not only a massive penalty but a top-to-bottom overhaul of how ITC and other companies like it operate.”

The statement noted that a recent report by the group found that TCEQ has penalized companies for fewer than 3 percent of unauthorized released of air pollution over the past seven years.