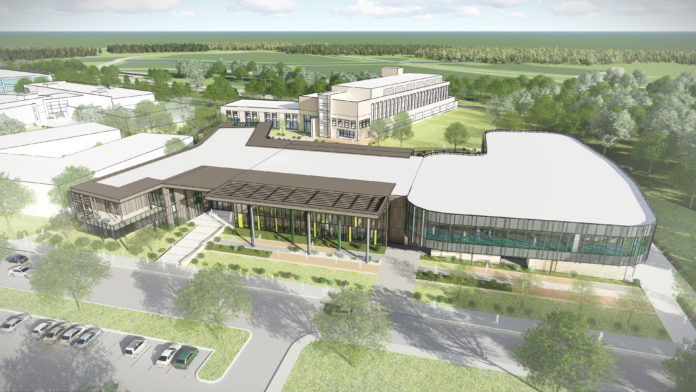 Groundbreaking ceremonies are 2-3 p.m. Friday, March 31, for a $65.7 million STEM and Classroom Building and a $38.2 million Recreation and Wellness Center at UHCL, 2700 Bay Area Blvd., Houston. Both are expected to open the fall of 2018.

Later this spring the university plans to break ground on a $24.6 million Health Sciences and Classroom Building at UHCL Pearland Campus, 1200 Pearland Pkwy., Pearland. It is expected to open in the spring of 2019.

The STEM and Classroom Building will contain 121,575 square feet for the study of science, technology, engineering and mathematics. A three-story section will accommodate research labs; a two-story section will house offices and classrooms. The building will include 15 teaching labs for mechanical engineering, physics, chemistry, geology, industrial hygiene and environmental safety. It will also house 12 specialty rooms for mechanical-engineering projects, computer-aided drafting, 3-D printing and more. There will be a 100-seat tiered lecture hall, an astronomy observation deck, a 30-seat computer lab – and 13 faculty research labs with room for six more.

The 81,709 square-foot Recreation and Wellness Center will include academic and recreational wings, open study spaces, casual seating, food service and private study rooms. An indoor, elevated three-lane running track will provide runners a campus view while overlooking two regulation-sized basketball courts and a multi-activity court for indoor soccer, hockey and other sports. The entire court space can be converted into an event or dining hall. It will also feature weight and cardio rooms, two multipurpose rooms for yoga and other exercises as well as three teaching labs and two classrooms.

The STEM and health-sciences buildings were funded by the 2015 Texas Legislature. In the same session, a bill gave UHCL authority to assess fees for construction of the recreation center, contingent upon approval by student referendum and support from the UH System Board of Regents. The referendum passed in 2016.

Speaking recently at his annual Report to the Community, UHCL President William A. Staples lauded the community partnerships that made the university expansion possible.

“It’s all about partnerships. With who? Everybody. With people, with corporations, with foundations, with legislators, with our alumni, with cities, and obviously, with the many donors who support the many initiatives we have at UH-Clear Lake.” Staples said.

Later this year, the university expects to begin construction on a $22 million 300-bed student-housing project on the Clear Lake campus. Rental revenue is expected to pay for its construction. It is expected to be ready for occupancy in late 2018 or early 2019.

University of Houston-Clear Lake offers more than 80 undergraduate and graduate degree programs, and three doctoral programs, from its four colleges, formerly known as schools, which include the College of Business, College of Education, College of Human Sciences and Humanities, and College of Science and Engineering. In 2011, the university gained approval from the state to add freshman- and sophomore-level courses to its roster and welcomed its first freshman class in fall 2014. For more information about the university, visit http://www.uhcl.edu.