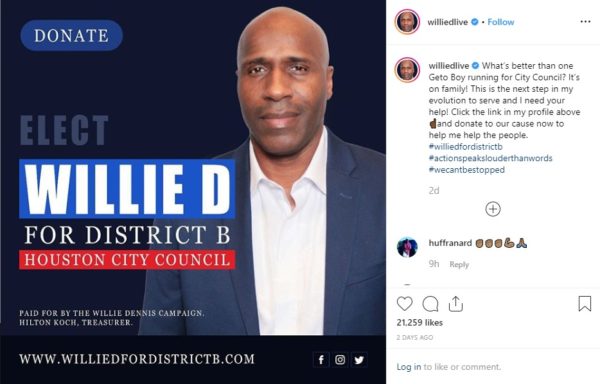 The Geto Boys’ Willie D is moving into politics in his hometown of Houston.

He made the announcement last week, about three weeks after his Geto Boys group memberScarface said he was doing the same thing. Willie also asked for donations in his post.

“What’s better than one Geto Boy running for City Council?” asked Willie on Instagram. “It’s on family! This is the next step in my evolution to serve and I need your help!”

In the comment section of Willie’s post, the “My Block” rapper sent his group member encouraging words and told him that he’s making the right decision.

“Congrats Will!! What better way to make change in our community From it, of it and love it!!” he wrote.

Willie D and Scarface aren’t the first two rappers to go into politics.

In 2010 Chicago rapper Rhymefest ran for Alderman of the 20th ward in his Windy City hometown but lost to incumbent candidate Willie Cochran by a slim margin.

In that same year, Wyclef Jean announced that he was running to be the president of Haiti where he was born, but his application was rejected because he never lived in the country for at least five years.

And in 2018 Dupre “Doitall” Kelly, from the ’90s rap group Lords of the Underground, ran for a city council seat in his hometown of Newark, N.J., although he didn’t win.

After Willie D made his surprising announcement, people seemed pretty excited about it.

“You got my vote,” one person wrote on Instagram.

“You were Born and raised there,” wrote another. “After all Who’s not familiar with the geto boys! You know the ppl the ppl know you. I say good for you and I’m praying that you have a very successful campaign.”

Both rapper’s announcement about their campaigns come shortly after Bushwick Bill, the third member of the Geto Boys, passed away from pancreatic cancer on June 9 at age 52.