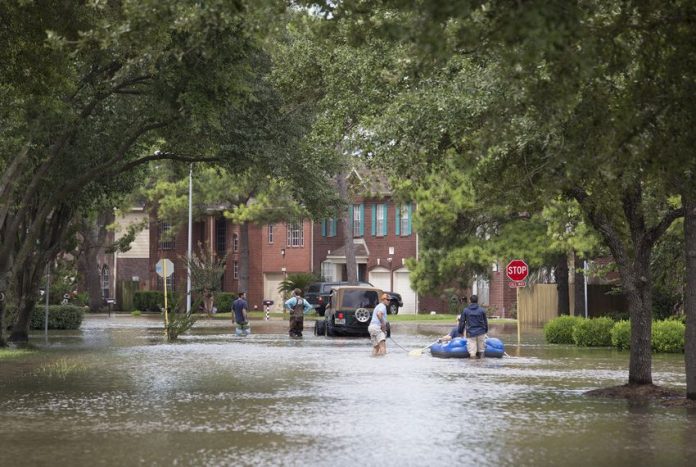 State lawmakers want to create a dedicated $800 million fund for flood prevention and recovery that would be safe from future legislative budget fights. They’re asking Texas voters to weigh in via a constitutional amendment on the ballot next month.

The proposed amendment comes as the state reels from the devastating effects of Hurricane Harvey, which dropped several feet of rain on the Houston area in a matter of days. And just last month, Tropical Storm Imelda delivered a deluge across many of the same Southeast Texas cities that are still in recovery.

Proposition 8 on the Nov. 5 ballot would set up the Flood Infrastructure Fund, which seeks to help the state recover from recent flooding while also preparing communities for future storms. If approved, the fund would get a one-time, $800 million allocation from the state’s rainy day fund as a starting point, and lawmakers could refill it in the future.

The money would be in the hands of the Texas Water Development Board. That, supporters of the proposition say, would allow it to be distributed more quickly in the event of a natural disaster — within a matter of weeks — because there would be no need to wait for lawmaker approval during the next legislative session. Advocates in the Houston area called the fund, the first of its kind in the state, the biggest step Texas has taken toward flood mitigation since the 1900 storm that destroyed Galveston Island.

“When it takes the feds years to even get your money, and the state’s going to do it in a matter of months — I mean, it’s pretty impressive how much quicker we’re going to move,” said State Rep. Dade Phelan, the author of the measure — unanimously passed by the Legislature — that put the amendment on the ballot. And for added security for the future, “Prop. 8 just creates a lockbox for those funds,” he said. This means future lawmakers can add to the fund, but they cannot drain it for other purposes, even if the money goes unused for multiple years.

The fund, and the proposed constitutional amendment to create it, would work in tandem with a set of other bills passed this year to promote regional cooperation, rather than county-by-county flood mitigation planning.

Parts of Southeast Texas saw the need for regional planning in 2017 as Hurricane Harvey reached its peak, dropping feet rather than inches of rain in just a few days, Phelan said. Some counties spared from the worst downpours still lived in fear of dam collapses upstream, and others feared flooding if a dam in another county needed to be lowered to prevent a collapse.

The idea is not without skeptics. Former state Rep. Talmadge Heflin, who works for the Texas Public Policy Foundation, said the conservative think tank is typically not excited about using the rainy day fund — officially called the Economic Stabilization Fund — for ongoing expenditures.

“We would exercise caution on creating something that likely won’t get a lot of scrutiny by the Legislature,” said Heflin, director of the foundation’s Center for Fiscal Policy. “They’ll say, ‘Well, there’s a set amount of money, and it’s depleted, or it’s down halfway.’ They’ll appropriate another slug of money to go in it, and that’s probably all of the thought they will give it.”

But the biennial Legislature and the federal government — which is still in the process of handing out funding for Hurricane Harvey recovery two years later — simply can’t keep up with how often major storms hit the state, said Rice University professor Jim Blackburn, who studied Southeast Texas’ flood infrastructure after the hurricane. Because of this, Phelan said the state can’t afford to wait for the legislative funding process every time there is a natural disaster.

Larry Larson, a senior policy adviser for the Association of State Floodplain Managers, a national group, said states and local governments are more or less on their own when it comes to building up their communities to protect against major flooding.

Blackburn said that while having a protected flood mitigation fund would be good for the state, it’s not a cure-all. He expressed concern about the fact that the fund does not have guaranteed annual support and will rely on future lawmakers to restore it as it runs out.

He also insisted upon the need to keep climate change in mind when spending money on fortifying dams or analyzing the size of floodplains, something he said he is unsure the state will do.

“What I’m concerned about is everything that we’re planning may be obsolete as soon as we build it,” Blackburn said.

The fund is only a start, Blackburn said.

Phelan has been traveling all over the state promoting Proposition 8, including in Southeast Texas, which just suffered another round of historic flooding, and South Texas, which faced its own historic deluge in June 2018.

“There’s some areas that have never flooded, but then the last five years” changed what anyone thought was possible, Phelan said.