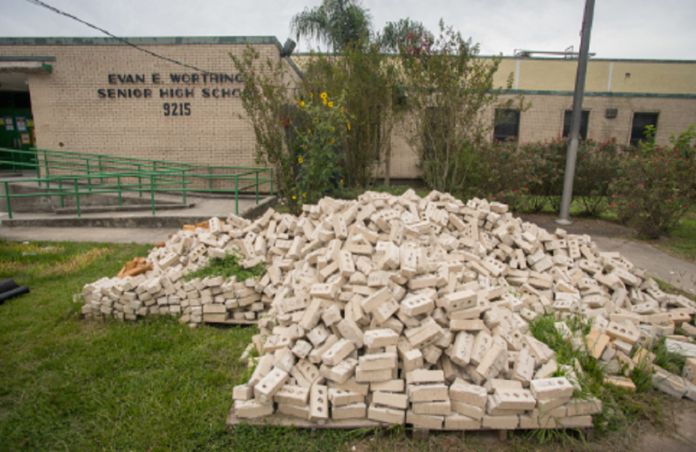 With modern construction underway and a new administration in place, Worthing High School is on the verge of a transformation.

While construction crews work tirelessly to rebuild the 59-year-old school nestled in Houston’s historic Sunnyside neighborhood, new Principal Khalilah Campbell-Rhone is doing the same from the inside out.

“My desire was to come in and put Worthing back on the map,” Campbell-Rhone said, recalling how the school’s academic programs were once highly sought after and school pride was ubiquitous. “We can get back to that.”

Worthing is among 40 schools being renovated or rebuilt as part of HISD’s voter-approved 2012 Bond Program. The $30 million project calls for a new facility that will incorporate a recently completed two-story classroom wing and accommodate 1,100 to 1,300 students.

The new classroom wing, which is the first phase of the project, was completed last summer and opened to students in August 2016. Students are attending school in that new wing — which features brightly colored learning centers, science labs, and career and technology education spaces, as well as a collegiate-style lecture hall — while crews finish rebuilding the remainder of the school.

Demolition of the old three-story building has wrapped up, and renovation of the fine arts building is more than halfway complete.

Once all work is complete, the 200,896-square-foot campus will boast four flexible learning centers, three career and technology education classrooms, and new spaces for administrative offices, student guidance, and athletics, as well as a dining area that opens to a large outdoor courtyard.

Target completion is slated for fourth quarter of 2018.

“It’s exciting. The community is really ready to see the completion,” Campbell-Rhone said as she walked the halls of the new classroom wing and pointed toward the adjoining construction site. “I think the community feels good about seeing the actual demolition, so that kind of gives them hope to know that the new building is coming, and it’s coming on time.”

As crews continue to physically rebuild the school, Campbell-Rhone said she is working to rebuild the school academically. For the past six years, Worthing has been designated by the Texas Education Agency as “Improvement Required.” Now the new principal and her leadership team are putting a laser-like focus on improving Worthing’s curriculum and academic programs.

Specifically, Campbell-Rhone and her team have implemented a new academic enrichment summer program for students who want to get ahead and a credit recovery program for those who are falling behind. As part of both programs, students are exposed to various college prep exams — such as the College Preparatory Exam and SAT — to help them get ready for college.

“I previously worked with many of the kids here, and I knew they weren’t working to their full potential,” said Campbell-Rhone, who was a school support officer for nearby Thomas Middle School, which is in the Worthing feeder pattern. “I wanted to come in to push them to be successful and excel.”

In an effort to engage students’ families, the school created a designated Parent’s Room where parents can take computer, parenting, and ESL classes and attend relevant informational meetings hosted by school staff.

Of course, Campbell-Rhone said, all of their work will be for naught if the community doesn’t know what the school has to offer. To combat that, her team is creating a marketing campaign and accompanying brochure for the Worthing feeder pattern to highlight campus courses and activities.

The goal, she said, is to boost attendance by making students and their families aware of the great programs and activities that can be found at their neighborhood school. Worthing offers standard core classes and extracurricular activities, as well as programs in tourism and hospitality, information technology, and agricultural and animal science.

HISD is currently in the midst of one of the largest school building programs in history. Construction is underway at nearly three dozen HISD campuses — more than any other time in district history. Once all work is complete, HISD will boast of one of the most modern portfolios of urban high schools in the nation.