Mark Hughes has a sense of humor about what happened to him last summer. On July 7, 2016, Hughes was wrongly identified by Dallas Police and news organizations around the world as a suspect in that day’s sniper attack at a Black Lives Matter march in the city, and when I meet him in the office of the tax prep company he owns in nearby Arlington, Hughes asks me with a straight face: “Are you familiar with the July 7th event?” Then, pointing to his desk neighbor: “You know, he was the one who was actually doing the shooting.”

It’s hard to imagine how Hughes would have survived the past year without cracking a few jokes. Almost everything about his life has been affected by the day his photograph was emblazoned on local news, CNN, and the Dallas Police Department’s official Twitter account, with the words “This is one of our suspects. Please help us find him!” above his photo.

Hughes had seen groups like Open Carry Tarrant County, whose members—and leadership, which is white—carry long-arm rifles on the street in front of his tax-prep business, in accordance with the law. And as he made plans to attend the march he decided, for the first time, that he should do the same. Philando Castile, the Minnesota man whose shooting death had been captured on video prior to the march, had his right to carry a gun violated by the officer who shot him. Hughes decided that meant he had a responsibility to assert his own.

“Does the Second Amendment not apply to us, to bear arms?” Hughes asks. “Here in Arlington, I see the groups on these streets. They’re just displaying their rights publicly.” Hughes read up on the laws regarding open carry, bought a shoulder strap for his AR-15 semi-automatic rifle in order to be compliant with the law, and headed to Dallas. Hughes was nervous when he first stepped out of his car with the gun over his shoulder in front of police, but after his first encounter with an officer who stopped him went peacefully, he relaxed. He and his brother marched, and then the chaos started. Hughes didn’t hear gunshots, but he saw people running, and started running, too. Within minutes, his brother realized that the fact that he was carrying a gun while shots were being fired could put him at risk, and urged him to get rid of it.

“I was like, ‘Why am I gonna give my gun up if they’re shooting?’” Hughes recalls, but when he understood the gravity of the situation—that he was a black man carrying a rifle in a racially-charged environment in which shots had been fired—he flagged down an officer, convinced him to take the gun, and decided to go home and get his rifle back a few days later. Hughes and a friend tried to get to his car, but the area where he’d parked had been closed following the shooting, so his friend pulled out her phone to hail an Uber—and that’s when they learned that Hughes was now the most wanted man in America.

“I still get chill bumps thinking about it,” Hughes says. His friend’s sister called her and told her to get away from Hughes—that they were going to kill him. “She was yelling it, so I could hear her. She said I was all over the news.”

She sent him the photo from the Dallas Police Department Twitter account, and he quickly realized how many angry police officers were in the area and looking for him. He took off the camouflage shirt he was wearing in the picture “to buy some time,” then decided that his best bet was to find the nearest squad car and explain the situation. He approached an officer who hadn’t seen his photo, told him what was going on, and was promptly cuffed, taken to police headquarters, and held for hours. The lack of respect he felt from the police bothered Hughes. He didn’t want to wear handcuffs (“I hadn’t done anything wrong”), but being cuffed against his will was only the first indignity he’d suffer that night.

“I walked in the room,” Hughes remembers, “And about 50-some officers were all looking at me like, ‘Got you.’”

Hughes was interrogated for more than an hour. Still seething at how he was being treated when he hadn’t done anything wrong, he ended up in a shouting match with a detective who, he says, asked him, “How long have you and your brother wanted to kill police officers” and who told him that “multiple witnesses” saw him shooting the gun. (Ballistics tests confirmed that the rifle had not been fired.)

Then, eventually, he was released—but the Dallas Police Department left the tweet with the photograph identifying him as a suspect and urging citizens to help find him online for most of the next day. A year later, the department still hasn’t issued a statement clearing Hughes of suspicion, or even offered a private apology to Hughes for leaving his photo online for so many crucial hours after the shooting.

That tweet has turned Hughes’ life upside-down. He listed his house for sale, sold two of the businesses he owned, and spent months looking over his shoulder as people who recognized him from the photograph still believed he had something to do with the shooting. It’s also taught him who his friends are. And it’s given him an opportunity to make a difference in the exact ways he wanted to when he decided to attend that march on July 7. 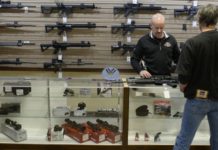