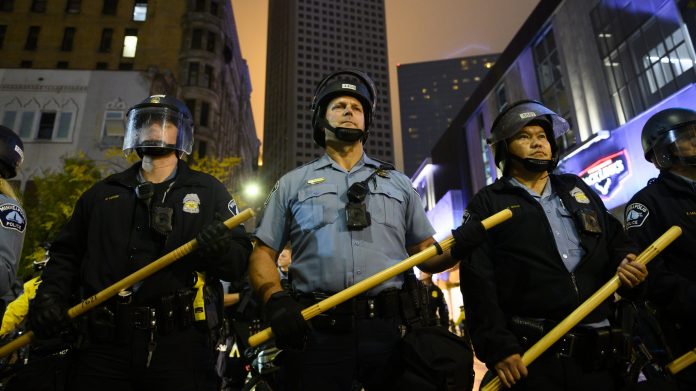 During a Black Visions Collective and Reclaim the Block rally at Powderhorn Park on Sunday, Minneapolis City Council President Lisa Bender announced that she and a group of her colleagues were proposing to disband the city’s police force.

Their decision comes in response to the tragic death of George Floyd, also known as rapper Big Floyd, who died while in police custody. Bender shared that the council’s goal is to “end our city’s toxic relationship with the Minneapolis Police Department.”

“It’s our commitment to end policing as we know it,” she continued, “and recreate systems of public safety that actually keep us safe.”

I’m at the community meeting at Powderhorn Park in Minneapolis, where City Council members just unveiled a mission statement for reimagining policing. ✊🏽 pic.twitter.com/MhVlOpajpU

On what would have been Prince’s 62nd birthday weekend, his city’s current Ward 3 Councilor Steve Fletcher released an op-ed that explained various options that would keep the community safe should the proposal go through.

Fletcher believes alternatives to traditional policing can be used in situations that involve individuals with mental health and/ or drug-related issues. He hopes that the city would further utilize their EMT workers and technology in new and innovative ways.

There are few details known about the council members’ plans. Critics of the proposed plan question who would enforce the law when criminal acts occur in the city. One possibility is Hennepin County Sheriff’s Office, who could step in because Minneapolis is in its jurisdiction.

The council have 9 out of 12 votes needed to pass a veto-proof proposal. Lisa Bender, Andrea Jenkins, Phillipe Cunningham, Steve Fletcher, Alondra Cano, Andrew Johnson, Jeremy Schroeder, Jeremiah Ellison, and Cam Gordon are the nine members who are in support of the proposal.

It seems that there is national support and celebration surrounding this monumentally brave and innovative decision.

Whoa … the Minneapolis City Council has voted with a veto-proof majority to disband the police department in the wake of the killing of George Floyd and murder and attempted murder charges against four officers. Ok that’s huge… https://t.co/V0QzHWQb3O

Rapper J. Cole simply posted that the move was “powerful.”

However, not everyone thinks this is a great idea. Mayor Jacob Frey has said that instead of doing away with the police force, he believes the city should try reforms.

Protect yourself and your family and evacuate Minneapolis if you can. If you cannot, then keep your head on a swivel as the city descends into complete chaos. https://t.co/Moi5M9UuHe