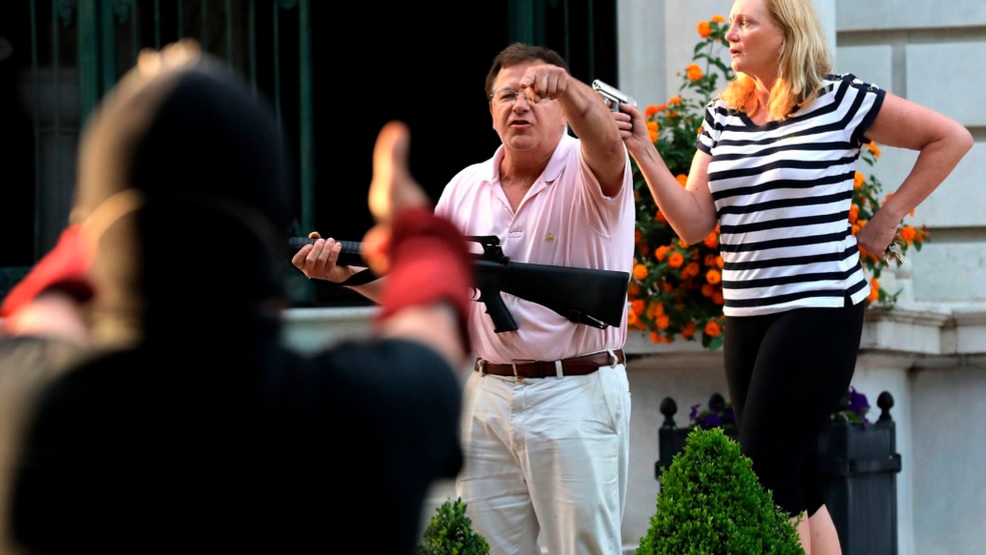 Missouri Gov. Michael Parson (R) vowed on Wednesday to pardon Mark and Patricia McCloskey, the white couple who drew national attention over the summer after footage of them pointing guns at Black Lives Matter protesters outside their home went viral, after the pair was indicted on charges related to the incident the day before.

Parson said at a news conference on Wednesday that he “most certainly would” issue a pardon for the couple should they be convicted on counts of exhibiting a weapon and tampering with evidence brought against them over the June incident, according to The Associated Press.

“We’ll let it play out and see how this all comes out in the courts, but I stand by what I said,” Parsons continued.

The governor also suggested he was prepared to issue pardons for the couple back in July after circuit attorney Kim Gardner launched an investigation into the June 28 incident.

A grand jury in St. Louis indicted the McCloskeys on the charges earlier on Tuesday. The couple had already been charged with felony unlawful use of a weapon in July and the jury leveled the evidence tampering charge against the couple this week.

When pressed at the time if he’d consider pardoning the couple if they were charged over the incident, Parson said, “I think that’s exactly what would happen.” He also said then that he thinks the couple “did what they legally should do” during the incident

The charges come after the couple was seen in late June pointing guns at Black Lives Matter protesters that had been passing their home in a gated community while in transit to the home of Mayor Lyda Krewson (D). The protesters had been calling on the mayor to resign after she read aloud activists’ personal information on a livestream.

But as the demonstrators passed the couple’s home, footage showed the couple yelling and pointing guns at some of the protesters.

The couple later claimed in an interview with local CBS affiliate KMOV that they pulled out their guns in their own defense and that they were afraid for their lives. However, one of the leaders of the demonstration, Rasheen Aldridge, has said the protest had been peaceful despite the couple’s actions.

The incident has gained widespread attention in the months since as President Trump and other Republicans have sought to defend the couple. Trump claimed over the summer that the couple would have been “beat up badly if they were lucky” and that their residence “was going to be totally ransacked and probably burned down like they tried to burn down churches.”

The couple spoke at the Republican National Convention in late August. There, they bashed the Democratic Party, with Mark McCloskey accusing Democrats of “no longer” seeing the “government’s job as protecting honest citizens from criminals but rather protecting criminals from honest citizens.”

“What you saw happen to us could just as easily happen to any of you who are watching from quiet neighborhoods around our country,” Patricia McCloskey also warned during the address.