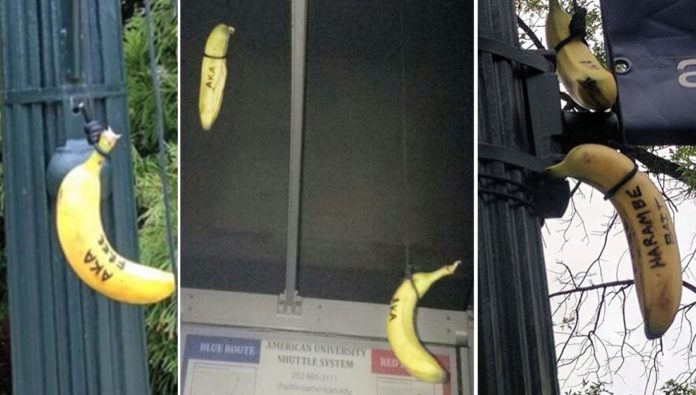 I find it so fitting that the site of one of the most racist incidents on a college campus took place at an institution called American University.

After all, taunting Black people with racial slurs and racially charged objects and symbols is as about American as you can get.

In fact, this is not the first time the University has had its problems with these types of incidents. In 2015, racist messages were posted on the campus’ Yak site and last year bananas were thrown at Black students.

Bananas seem to be a particular favorite for the students at American because on Monday they were found hanging from nooses throughout campus.

Images of the bananas were labeled “Harambe Bait” and “AKA,” an abbreviation for Alpha Kappa Alpha, the first Black sorority.

The hanging bananas appeared after Taylor Dumpson, a member of the sorority, was elected as the University’s first Black female Student Government Association President.

In the wake of the incident, Neil Kerwin, president of the university issued this statement.

The crude and racially insensitive act of bigotry reported this morning is under investigation by AU Campus Police with assistance from the D.C. Metropolitan Police Department (MPD) and other AU offices and senior officials.

We strongly condemn what happened; will do all that we can to find those responsible; and ask that anyone who may know of those involved to please step forward and contact Public Safety at 202-885-2527 or the AUPD Tips Site.

We will alert the university community of the investigation’s findings and next steps and will respond as swiftly and strongly as possible.

Racially charged acts of bigotry are done to instill fear and inflict pain in our community—especially at stressful times, such as at the end of the term.

I regret this happened, apologize to everyone offended, and state emphatically that this incident does not reflect what American University truly is. While this incident targeted AU’s chapter of Alpha Kappa Alpha Sorority, Incorporated, and occurred after the first black woman and AKA member was sworn in as the Student Government president—our entire university community has been adversely affected by this cowardly, despicable act.

Know that American University remains committed to principles of diversity, inclusion, common courtesy, and human dignity, and acts of bigotry only strengthen our resolve. Anyone who does not feel similarly does not belong here.

In response, Dumpson, responded with a letter of her own to the student body.

It is disheartening and immensely frustrating that we are still dealing with this issue after recent conversations, dialogues, and town halls surrounding race relations on campus. But this is exactly why we need to do more than just have conversations but move in a direction towards more tangible solutions to prevent incidents like these from occurring in the future.

As the first black woman AUSG president, I implore all of us to unite in solidarity with those impacted by this situation and we must remember that “if there is no struggle, there is no progress” – Frederick Douglass. We must use this time to reflect on what we value as a community and we must show those in the community that bigotry, hate, and racism cannot and will not be tolerated.

This is not what I imagined my first letter to you all would be. In my first message to the student body, I would have wanted to talk about accountability, transparency, accessibility, and inclusivity. Now more than ever, we need to make sure that members of our community feel welcomed and above all, safe on this campus.…

This will not be tolerated now, or ever, on the campus of American University and I will do everything in my ability to ensure that this never happens again.