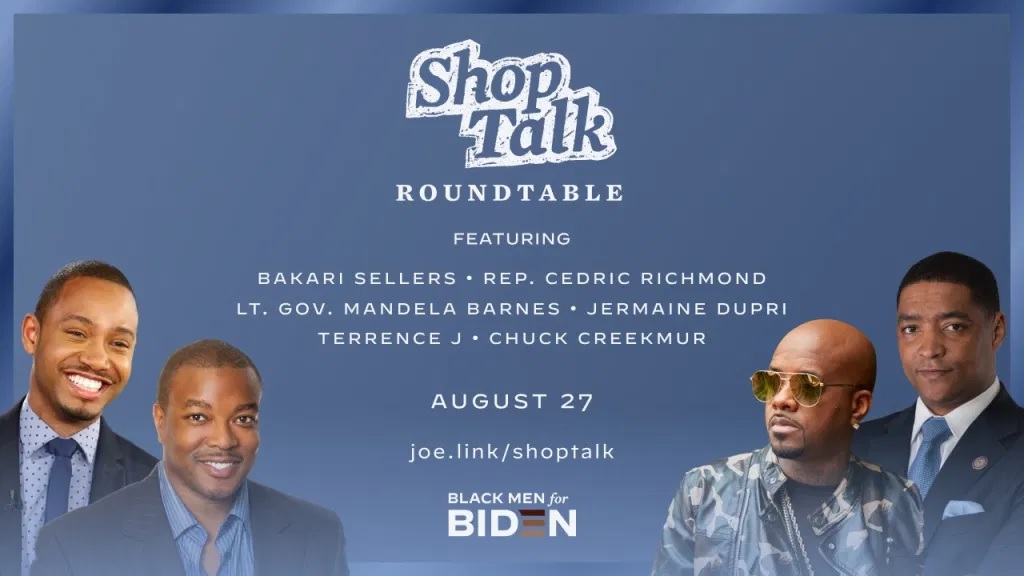 Democratic Presidential Nominee Joe Biden has echoed the sentiments of many who are sickened by the repeated shootings by police of unarmed African Americans.

This week, Biden heaped praise on the Milwaukee Bucks and other National Basketball Association teams who are on the verge of canceling the rest of the season to stand against the violence.

“Tonight is real important for Black men to have a conversation about our concerns,” said Dupri. “You can’t possibly be Black and not be bothered by any of this that’s going on. People ask me why I decided to be involved in this panel tonight and I just say that, you can’t be Black and not be bothered by what’s going on in this country and I’m glad the Biden campaign is doing this.”

Gaulien “Gee” Smith, a Wisconsin small business owner, will host the event, and guests will participate in a roundtable focused on issues impacting Black men around the nation.

“For generations, Black-owned Barber shops in this country have always served as a safe space for Black men of all ages to engage in enlightening, entertaining and challenging conversations,” said Richmond. “Although COVID-19 has prevented us from physically hosting Shop Talk at barber shops across America, I’m honored to bring this cherished component of Black boyhood and manhood to the main stage during a time when we must all lean on each other as brothers.”

During the discussion, participants will have an opportunity to hear from Wisconsin residents about the police shooting of Jacob Blake in Kenosha, and the impact it has had on their communities, said Kamau Marshall, the director of Strategic Communications for the Biden campaign.

“We always strive for authenticity when engaging our key constituency groups by meeting people where they are and facilitating spaces for empowering and forward-looking discussions,” Marshall told NNPA Newswire.

He added that “Shop Talk” counts among the new Biden-Harris coalition programs created for Black men and led by Director of African American Engagement Trey Baker.

“To have that space is an example of how our campaign is bringing like minds together to stand up for the issues they care about the most,” Marshall continued.

“By selecting a state to anchor the conversation each week, we’re confident that these gatherings will energize more Black men to support Joe Biden and Kamala Harris – the candidates that will undoubtedly champion their safety, economic prosperity and physical and mental well-being.”

Following the police shooting of Blake, whose three small sons were inside the vehicle in which cops opened fire, Biden expressed his dismay while also cautioning that violence wasn’t the answer.

“Once again, a Black man – Jacob Blake – was shot by the police. In front of his children,” Biden stressed. “It makes me sick. Is this the country we want to be? Needless violence won’t heal us. We need to end the violence – and peacefully come together to demand justice.”

The Milwaukee Bucks, whose home arena is about 40 miles from Kenosha, decided not to take the court for a playoff game on Wednesday. The team said it’s not a boycott, but a stand against unarmed African Americans’ repeated shootings by law enforcement officers.

The NBA and WNBA decided to cancel games, while some Major League Baseball teams also chose not to play on Wednesday. Both the NBA and WNBA reportedly are on the verge of canceling the rest of their season to show unity with protesters and stand against the epidemic of police shootings of unarmed African Americans.

“This moment demands moral leadership. And these players answered by standing up, speaking out, and using their platform for good. Now is not the time for silence,” Biden said. The Democrat has also called for an immediate, full and transparent investigation.

“The officers must be held accountable,” Biden demanded. “These shots pierce the soul of our nation. Jill and I pray for Jacob’s recovery and for his children.”

“Equal justice has not been real for Black Americans and so many others. We are at an inflection point. We must dismantle systemic racism. It is the urgent task before us. We must fight to honor the ideals laid in the original American promise, which we are yet to attain: That all men and women are created equal, but more importantly, that they must be treated equally.”

People interested in watching “Shop Talk” can sign up for it by clicking here. A link for the live event will be sent to registrants.

Biden’s campaign has always made a concerted effort to target Black voters, but it has seemed to double down on that commitment in recent weeks. That includes earmarking a significant chunk of a massive $280 million ad campaign to specifically appeal to Black audiences.