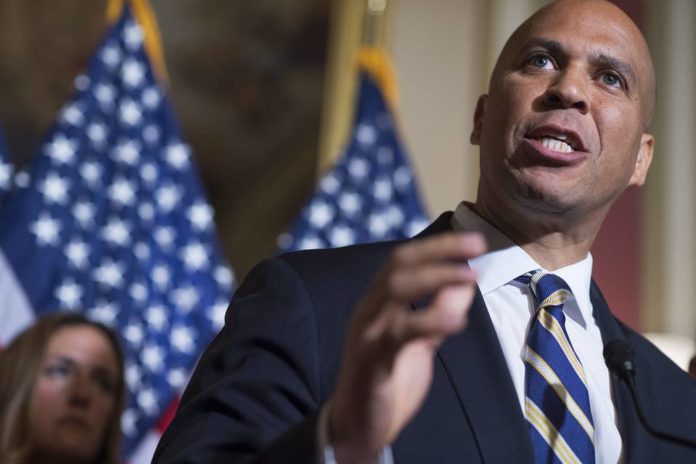 In a history-making testimony before the Senate Judiciary Committee, Sen. Cory Booker (D-N.J.) said Wednesday that the American people “cannot count” on fellow senator Jeff Sessions to bring justice to the justice system if confirmed as attorney general.

Booker sat alongside civil rights icon Rep. John Lewis (D-Ga.) and Congressional Black Caucus Chair Rep. Cedric Richmond (D-La.) as he delivered his remarks. All three lawmakers were scheduled to go at the end of Sessions’ confirmation hearing. All three eviscerated Sessions’ record, one by one.

Booker pointed out that he and Sessions, an Alabama Republican, have always respected one another, citing legislation they co-sponsored. The praise stopped there.

“Sen. Sessions has not demonstrated a commitment to a central requirement of the job ― to aggressively pursue the congressional mandate of civil rights, equal rights, and justice for all,” Booker said. “In fact, at numerous times in his career, he has demonstrated a hostility toward these convictions.”

Would Sessions pursue justice for women if confirmed to head the Justice Department? “His record indicates that he won’t,” Booker said, adding that the same goes for immigrants, voting rights and equal rights of LGBT Americans.

Booker, a leading criminal justice reform advocate, also pointed out that Sessions opposes reform in that area, and has helped stall bipartisan legislation in the Senate.

“His record indicates that we cannot count on him to support state and national efforts toward bringing justice to a justice system that people on both sides of the aisle readily admit is biased against the poor, drug addicted, mentally ill, and people of color,” Booker said.

Willie Huntley, a former assistant U.S. attorney, testified in support of Sessions. Huntley said that the Sessions he knows would enforce and follow the laws of the U.S. “evenhandedly” and “equally.”

But then came Lewis, who described segregation and racial injustices in his childhood home of Alabama with a booming voice that shook when he recalled the “chokehold of discrimination and racial hate” that surrounded him as he grew up in the South.

“Any black person who did not cross the street when a white person was walking down the same sidewalk, who did not move to the back of the bus, who drank from a white water fountain, who looked a white person directly in the eyes could be arrested and taken to jail,” he said.

The U.S. is different now, Lewis said. The country had made progress, but he warned that “there are forces that want to take us back.”

“It doesn’t matter how Sen. Sessions may smile,” he said. “How friendly he may be, how he may speak to you, but we need someone who is gonna stand up, speak up and speak out for the people that need help.”

Richmond let Republicans on the Judiciary Committee know what he thought about their strategy to have lawmakers testify at the very end of a two-day confirmation hearing.

“[It] is the equivalent of being made to go to the back of the bus,” he said. “It is a petty strategy. The message sent by this process is duly noted.”

Sessions struggled on day one of his confirmation hearing to reason past statements, and his record. In 1986, Sessions was denied a federal judgeship because he was deemed too racist. Allegations at the time said that he called a black attorney “boy,” and once suggested a white lawyer was a race traitor for working for black clients.

“I did not harbor the kind of animosities and race-based discrimination ideas that were — that I was accused of. I did not,” Sessions said.

Richmond put senators on notice Wednesday, telling them that if they voted to confirm Sessions they would be “permanently marked” as a co-conspirator in an effort to move the country in reverse.

“You all must face a choice: Be courageous or be complicit,” Richmond said. “He has no track record of fighting for justice for minorities. If he were in fact a champion for civil rights, wouldn’t the civil rights community support his nomination instead of speaking with one voice in near unanimous opposition?”