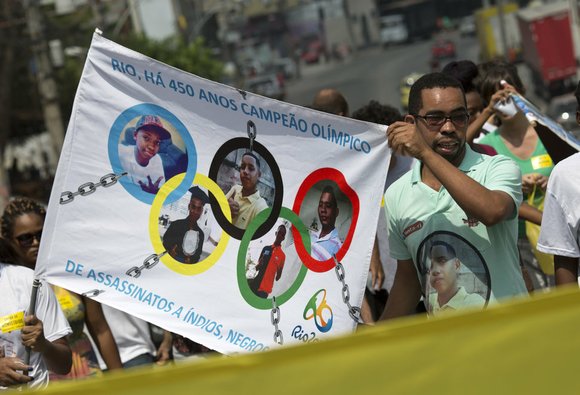 As protests continue throughout the country over the police killings of Alton Sterling and Philando Castile, the latest African-American men to die at the hands of police, a coalition of Black Lives Matter activists will take their movement to a new place next week: Rio de Janeiro.

It’s the latest effort to expand the Black Lives Matter message across the globe, and it comes at an important time. With less than a month to go before Rio hosts the 2016 Olympic Games, the activists hope they can take advantage of the spectacle to highlight the city’s rising levels of police violence and connect with Brazilian activists who are fighting a similar struggle.

“Police brutality is global. And Brazil has its own form of ruthlessness,” Daunasia Yancey, the founder of Black Lives Matter’s Boston chapter, told The Huffington Post. “The movement that came before and during and after Ferguson has been really intentional about a global struggle and understanding that our freedoms are all tied to each other.”

Yancey, one of the organizers who met with presumptive Democratic presidential nominee Hillary Clinton in October, is part of a coalition of activists that plans to meet with organizations fighting police violence in Rio. The group will also include Rev. John L. Selders Jr. and Pamela Selders, who together led Moral Monday protests against police violence in Connecticut, and other activists who have worked with the Black Lives Matter movement.

Their trip to Rio is the work of Elizabeth Martin, the founder of Brazil Police Watch, a Boston-based organization that has sought to draw American attention to police brutality issues in Brazil.

Martin formed the organization after Rio police shot and killed her nephew in 2007. She has since organized petition drives that call on the International Olympic Committee and soccer governing body FIFA to work with the Brazilian government to reduce the number of police killings in the country.

The movement that came before and during and after Ferguson has been really intentional about a global struggle and understanding that our freedoms are all tied to each other.

Last week, Sterling and Castile became the 122nd and 123rd African-American men shot and killed by police officers in the U.S. this year, according to data compiled by The Washington Post. Police also shot and killed 258 black men in 2015, the Post found. A similar survey from The Guardian found that African-American men are nine times more likely to die at the hands of police than members of any other demographic group.

But the Black Lives Matter activists who travel to Brazil this month will encounter a comparable and perhaps even more widespread problem in Rio. Brazil is home to some of the world’s deadliest police forces, and escalating violence in the years before the Olympics has only worsened the situation.

Police in Rio de Janeiro state have killed more than 2,500 people since the International Olympic Committee chose Rio as the 2016 host in 2009, according to Amnesty International. Police-related shooting deaths increased 40 percent in the state from 2013 to 2014, the year Brazil hosted the FIFA World Cup, according to Amnesty’s numbers. They rose yet again in 2015, when police in the state killed 645 people.