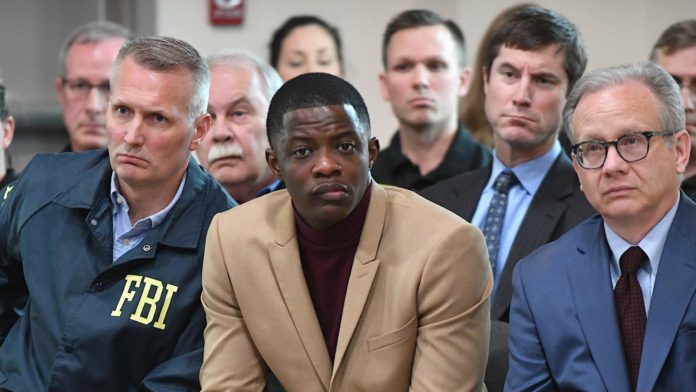 olice are on the lookout for a gunman after he shot and killed four people at a Waffle House and then ran naked around a neighborhood, CNN reports.

“Keep your doors locked, keep your eyes open. If you see this individual- if you see a nude guy walking around this morning- call the police department immediately,” Metro Nashville police spokesman Don Aaron said.

Unhinged And On The Loose

Travis Reinking of Morton, Illinois is on the loose after he shot an “assault-type rifle” and killed two people outside the Waffle House, police said. Then Reinking entered the restaurant and unleashed more shots.

“He then went inside the restaurant (and) continued firing,” killed two more people, Aaron said.

“My friend ‘T,’ the cook at Waffle House, died trying to get away,” witness Chuck Cordero told CNN.

Thankfully, 29 year old James Shaw Jr. decided to take matters into his own hands and stop what could have been a unbridled massacre. The vigilant young man watched the gunman from a corner and when Reinking stopped shooting to look at his gun, he attacked.

“He is the hero here, and no doubt he saved many lives by wrestling the gun away and then tossing it over the counter, and prompting the man to leave.”

Police later reported that the gunman who initially took off all his clothes, later dressed in just a pair of pants.

“A man believed to be Travis Reinking was last seen in a wood line near Discovery at Mountain View Apts. on Mountain Springs Drive near the Waffle House,” police tweeted. “The man was seen wearing black pants and no shirt.”

Waffle House tweeted its condolences for the tragedy.

“This is a very sad day for the Waffle House family,” the restaurant chain tweeted. “We ask for everyone to keep the victims and their families in their thoughts and prayers.”

So far police have no motive.