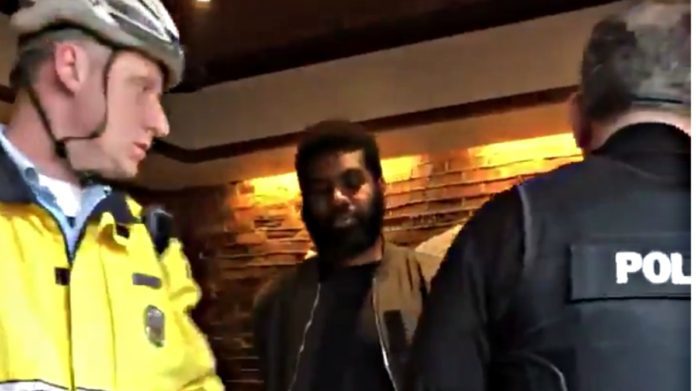 Starbucks has some explaining to do after video surfaced on social media showing Philadelphia police officers arresting two Black men.

According to social media accounts the two men were waiting in the Starbucks for a friend when a barista called the cops.

“What did they do,” one man can be heard saying in a video captured by Melissa DePino.

“They didn’t do anything, I saw the entire thing,” another person said.

Just as the friend of the two men arrived, the men were put in handcuffs and arrested by police.

Police have not said why they were arrested.

In the video confused white patrons appear to wonder why this type of thing never happens to them when they are in Starbucks.

The backlash on social media was swift with people calling for the coffee chain to address this incident using the hashtag #boycottstarbucks.

Starbucks posted a message on social media in response:

We’re reviewing the incident with our partners, law enforcement and customers to determine what took place and led to this unfortunate result.

According to CBS Philly, the Philadelphia Police Department says an internal investigation is underway following the arrest on thursday.

On Friday, the police issued a statement.

“The entire incident, including the actions of the responding officers, is under internal investigation. Once we gather all the facts, we will comment further.”