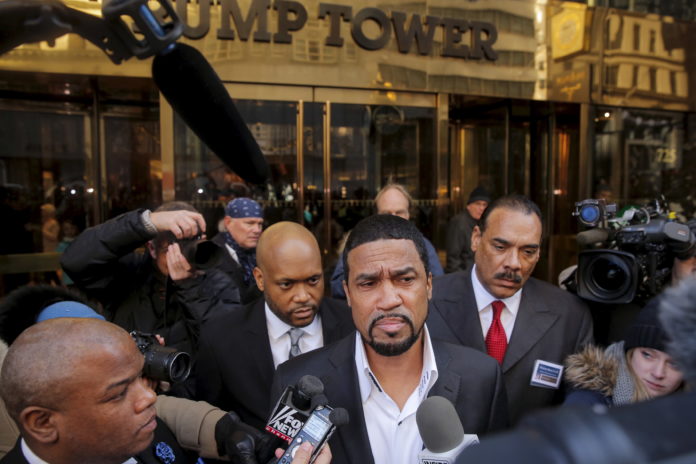 The Reverend Darrell Scott, pastor of the New Spirit Revival Center in the Cleveland area, a speaker at the Republican National Convention and a member of the Trump Transition Team Executive Committee, by his own admission falsely stated certain facts that curiously suggested that some of the top gang leaders he had a relationship with in Chicago where Trump supporters. Scott made his statements apparently in an attempt to impress President Trump and others at a Feb. 1 White House Black History Month meeting of Black Trump supporters convened by President Trump.

During the course of the meeting Scott told Trump:

“I was recently contacted by some of the top gang thugs in Chicago for a sit down. They reached out to me because they associated me with you. They respect you (Trump), they believe in what you’re doing and they want to have a sit down about lowering that body count.”

Scott went on to say:

“These are guys straight from the streets, no politicians. Straight street guys and they’re going to commit that if they lower that body count we’ll come in and we’re going to do some social programs.”

The president, who has already threatened on Twitter to “send in the feds” to Chicago, responded, “If they’re not going to solve the problem—and what you’re doing is the right thing—then, we’re going to solve the problem for them because we’re going to have to do something about Chicago.” In the end, the president seemed to show his approval of the meeting.

Shortly after the meeting, however, Scott began to retreat from his statements which apparently caught the attention of numerous news outlets and people both in Chicago and elsewhere. Scott told WGN News (while laughing) “I misspoke,”. “I only had three hours sleep at the time.  I meant to say former street thugs. “Former”

But it doesn’t appear that any of Scott’s White House statements were true!

Interestingly enough, those who have worked for years to reduce violence and crime in Chicago said they have never heard of or seen Scott. Father Michael Pfleger of St. Sabina Church, a well-known and respected combatant of the city’s crime problems, was one of the first to blast Scott for his statements.

“I guess the first thing is, where’s he been and who is he? Where’s he been while we’ve been fighting this thing for years? Where has this pastor been and why hasn’t anybody heard about him?” Pfleger told WGN News. “It’s very surprising to me, as somebody who works with brothers in the street all the time, that they reached out to Akron, Ohio … If you care about this, how come you haven’t done anything about this until now and you’re sitting at breakfast with Donald Trump? How much money is involved?”

In January there were 51 murders in the Chicago, one more than during the same month a year earlier. The city saw 299 shooting victims last month, eight more than in January 2016.

At a different point in the Feb. 1 Black History Month White House meeting, Trump noted that “Frederick Douglass is an example of somebody who’s done an amazing job and is getting recognized more and more, I noticed.” The remark caused many on Twitter to ask if Donald Trump even knew who the famed abolitionist and orator was.