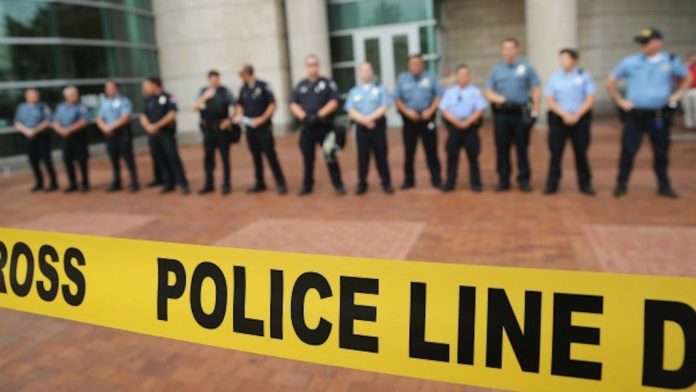 An off-duty police officer has been shot by another cop in St. Louis’ North Pointe neighborhood. A suspect has also been injured.

The police license recognition system spotted a stolen car from Maryland Heights last week. They tried to stop the vehicle with spike strips and three people in the car fired shots at officers.

One of the suspects was injured when he was shot in the ankle and two guns were recovered at the scene. A second suspect fled uninjured on foot and was captured a short distance away. A third is still at-large.

An off-duty officer heard the incident and ran outside to help. He was ordered to get on the ground and surrender. He complied. Then an officer recognized him and told the other cops to let him up, that is when he was shot.

The officer who got shot is 38-years-old and was taken to the hospital to treat a gunshot wound to the arm. He is listed as in good condition.

An attorney for the wounded black cop had plenty to say.

“This is the first time that we are aware, that a black professional, in law enforcement, himself being shot and treated as an ordinary black guy on the street. This is a real problem,” said attorney Rufus J. Tate Jr.

The shooter said he did not recognize the officer he shot and that in the moment he feared for his safety.

“In the police report, you have so far, there is no description of threat he received. So we have a real problem with that. But this has been a national discussion for the past two years. There is this perception that a black man is automatically feared,” said Tate Jr.

According to him, the injured officer had identified himself and complied with the other officer’s commands.