In an election that is less than two weeks away, London Breed, the current president of San Francisco’s Board of Supervisors, could become the city’s first Black female mayor.

“Every time someone stands up for what they believe in and they are willing to work hard for something, it gives others permission to do the same,” Breed said. “I never thought I could become mayor. Seeing my name on the ballot the other day when I voted was something I never imagined…I am proof that no dream is too big. There will be obstacles and setbacks, but each voice is powerful. We need more voices in politics from people who come from different experiences.”

Focused on affordable housing, education, homelessness, transportation, public safety and a low unemployment rate—which is currently below three percent in San Francisco—Breed hopes to transform San Francisco into a the city that is inclusive and equitable for everyone.

On June 5, California will hold elections in their “top-two primary election system,” for all candidates and party affiliations, where the two people with the highest votes, will then advance to the general election.

In addition to California, in the state of Alabama, a record number of Black women are running for Democratic offices in the deep-red state, following Republican Roy Moore’s defeat.

Over 35 women of color were running for various political offices in Alabama, including Suzanne Coleman, who, if she wins, will become one of the first Black females to serve District 5 in Alabama’s House of Representatives.

Michigan State Rep. Erika Geiss, who is running to represent District 6 in the state senate, is focused on a number of issues including economics, education and criminal justice. Geiss believes that races such as these will prove to be a vital tool in placing more women of color in higher areas of office.Celebrating the great achievement of Black women in America, with even bigger possibilities to come, Kamau Marshall, the director of African American media and the deputy national press secretary of the Democratic Congressional Campaign Committee, said that Black women in general, are recognizing their power and will play major roles in all elections, including the 2020 presidential race.

“A lot is happening in the world of women,” Marshall said. “This kind of power will inspire and wake others up, especially Black millennials, who will play a large role in the 2020 presidential elections.” 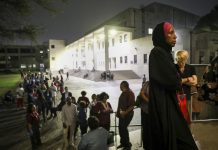 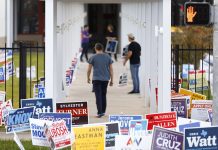