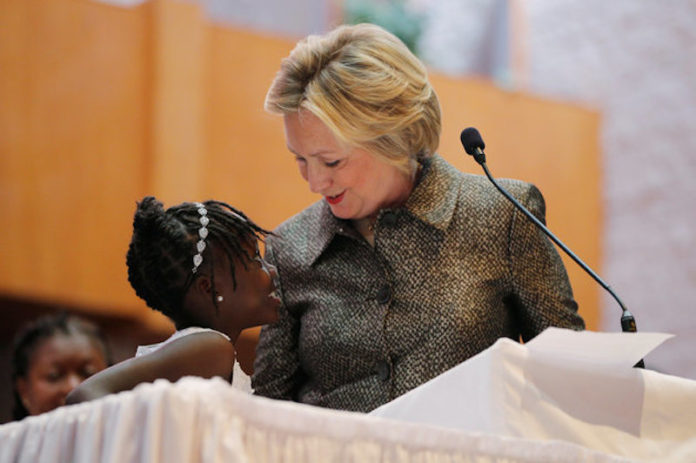 Democratic presidential candidate Hillary Clinton paid a visit to a historic black church on Sunday, mixing Bible verses with frank talk about the “implicit bias” and systemic racism that still exists in America.

Clinton took to the pulpit at Little Rock AME Zion Church, a church in Charlotte, North Carolina, whose members have been involved in protests against the police shooting of Keith Scott, a 43-year-old black man, on Sept. 20.

The candidate spoke about Scott’s death, and the death of Terence Crutcher, a black father from Tulsa, Oklahoma who was killed by police days earlier.  She also mentioned the stories of two young residents of Charlotte, Taje Gaddy, 10, and Zianna Oliphant, 9, who testified before Charlotte’s City Council last week.

“I wouldn’t be able to stand it if my grandchildren had to be scared and worried the way too many children across our country feel right now. But because my grandchildren are white, because they are the grandchildren of a former president and secretary of state, let’s be honest here, they won’t face the kind of fear that we heard from the children testifying before the city council,” Clinton said during the speech.

Clinton invited Oliphant, who was in the audience, to stand next to her on the pulpit ― lamenting about how the little girl who should be “dreaming about all the wonderful things that her future holds for her” is instead “talking about graveyards” and the violence facing her community.

While saying that the families of fallen police officers “deserve our prayers,” Clinton acknowledged that “implicit bias” against people of color has a substantial impact on black communities. She sees it in the way black men are far more likely to be stopped and searched by police, how they are more sentenced to longer prison terms than white men for the same crime.

“We need to make sure our police officers are trained in de-escalating tense situations,” she said, receiving a round of applause from the church.

Quoting Proverbs 29:18, which reads, “Where there is no vision, the people perish,” Clinton called for a common vision of an America where every child has the chance to “live up to their God-given potential.”

“God loves us all, right? And we are called to care for and cherish each other,” she said. “Protecting all of God’s children is America’s calling.”

Clinton was scheduled to visit Charlotte one week ago, but postponed the trip after Scott’s death. Polls indicate that the race between Clinton and her Republican opponent Donald Trump is tight in North Carolina, which has traditionally been a red state.

Clinton hasn’t been doing as well as Barack Obama did in 2008 and 2012 with the state’s younger voters. Still, according to the Associated Press, if Clinton wins North Carolina, there’s little that Trump could do to stop her from winning the presidency.

During the service, Little Rock AME Zion’s spiritual leader, Rev. Dr. Dwayne Walker, encouraged his congregation to get out and vote. The church had placed voter registration cards at every entrance to the building.

“We want to make sure that everyone here is registered and will vote,” Walker said.