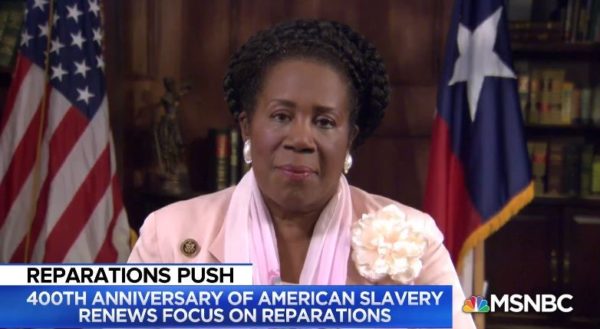 Rep. Sheila Jackson Lee told MSNBC on Tuesday now is exactly the time to push for reparations in part because of President Donald Trump’s actions.

Under Lee’s proposal, a commission would be tasked with deciding who would receive reparations and how much.

“Tragically, 250 years of slavery in the United States for those enslaved Africans did not receive workman’s comp, salary, 401(k), or anything, and literally built the wealth of the United States and Europe,” Jackson said.

The discussion came up after Jackson joined other members of the Congressional Black Caucus on a trip to Ghana to commemorate the 400th anniversary of the beginning of the slave trade from Africa to what became the present-day United States.

Trump has recently come under attack for telling Somali-born Rep. Ilhan Omar and three other congresswomen of color to “go back” to the “crime infested places from which they came” July 14.

Since then, the words “send her back” have been yelled at a Trump campaign rally and even chanted in response to a California restaurant promotion offering a free side for doing so.

“The dastardly impacts of white nationalism, white supremacy, and outright racism that has impacted others, but certainly has impacted, over the decades and centuries, African Americans, the descendants of enslaved Africans,” Jackson said.

“We’re not a broke country. We’re, in fact, a prosperous country if our funds would be directed not to, if I might say, the top 1%, but really to people who are in need,” Jackson told reporters. “But I do believe the country has a capacity and now is the time in this horrible atmosphere that we’re in to really move toward reconciliation and understanding.”