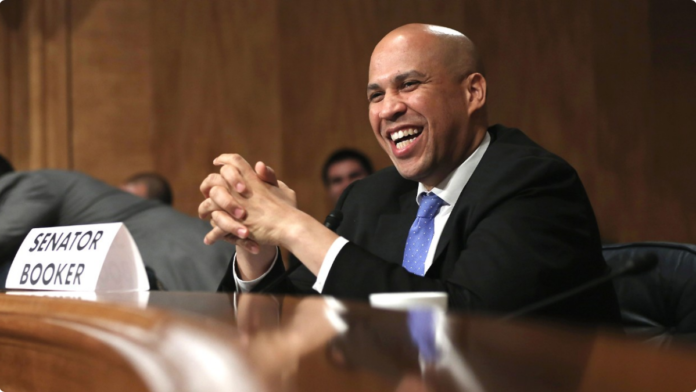 Senator Cory Booker believes that the best tool in our political arsenal is love.

The senator lives by the creed of a “conspiracy of love,” using the phrase often to describe everything from his own disadvantaged youth to the state of our politics today.

Recently, Booker employed that love angle again in speaking to a state NAACP convention, telling the crowd that the best way they could win their political fights was through love.

“Love says everybody has worth and has dignity. It’s about looking at someone and … understanding that my destiny is interwoven with your destiny,” he continued, adding, “You can’t lead the people if you don’t love the people.”

He even went so far as to suggest that love was the best force to win out against President Donald Trump, though he didn’t use Trump’s name.

“Let me tell you something,” he said. “I’ve given an entire speech, and I haven’t mentioned the name of the president of the United States. And you know why? Because it’s not about him. It’s about us!”

“Don’t be one of those people I catch calling our president nasty names,” Booker later admonished. “I’m serious. How can you think that you’re going to beat darkness by stealing darkness? If Nelson Mandela can love his jailers, if Martin Luther King can love Bull Connor—we’ve got to be people of love!”

While some on both sides of the aisle might consider the “conspiracy of love” to be less about substance and more about style, Booker does have a significant following, and that’s enough to get presidential rumors swirling.

Booker said that it would be “irresponsible” to say whether or not he would run during an interview with Politico, but many already see him as the exact opposite of Trump, whose campaign and administration has been characterized by bullying and demeaning Trump’s opponents.

However, that same loving style may be hard to be confident in, given the current environment.

“But if Democrats are to find Booker appealing as a top-of-ticket candidate, they’re going to have to get used to his pacifist-in-a-bar-fight style,” Politico wrote in its profile on Booker, and they may have a point.

Still, Booker insisted, just because he loves Trump doesn’t mean he won’t work against him.

“I am so determined to fight and stop Donald Trump,” Booker said, “whether it’s taking health care away from millions of people, whether it’s putting in place a Muslim ban that I just find discriminatory and bigoted, whether it’s doing what he’s doing with our EPA or our DOJ. I want to fight him. But he will not … I’m not going to let him turn me into that which I want to fight against.”