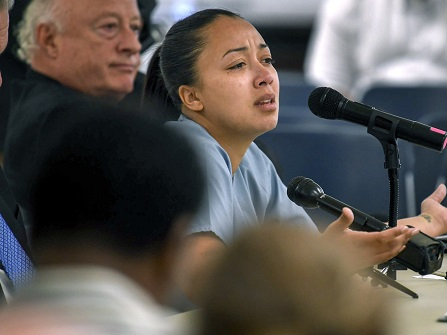 Cyntoia Brown was sitting in the visiting room at the Tennessee Prison for Women on Monday morning when her lawyers walked in with the life-changing news.

“You’re getting out in August,” Charles Bone said as soon as he saw her.

Her reaction was immediate.

“She just lit up with a joy I’ve never seen before,” said Kathy Sinback, the administrator for Nashville’s juvenile court who acted as Brown’s first public defender.

Sinback said a member of the legal team asked Brown if she was disappointed it would take another seven months before she was free.

Instead, Brown is due to be released on Aug. 7. She will be 31 years old by then. She has lived behind bars since she was 16.

Brown was sentenced to life in prison in 2006 after she fatally shot a man in the back of the head while he was lying in bed beside her. But in a remarkable announcement Monday, Gov. Bill Haslam said her rehabilitation behind bars, combined with her youth at the time of the crime, warranted mercy.

Haslam granted Brown a full commutation to parole on Monday. She will stay on parole for 10 years.

“Cyntoia Brown committed, by her own admission, a horrific crime at the age of 16,” Haslam said in a statement. “Yet, imposing a life sentence on a juvenile that would require her to serve at least 51 years before even being eligible for parole consideration is too harsh, especially in light of the extraordinary steps Ms. Brown has taken to rebuild her life.

“Transformation should be accompanied by hope. So, I am commuting Ms. Brown’s sentence, subject to certain conditions.”

Her Aug. 7 release marks 15 years since the date of her crime. Brown’s attorneys said 15 years is a typical sentence for a second-degree murder conviction.

In a statement released by her lawyers, Brown thanked  Haslam “for your act of mercy in giving me a second chance. I will do everything I can to justify your faith in me.”

“With God’s help, I am committed to live the rest of my life helping others, especially young people. My hope is to help other young girls avoid ending up where I have been.”

The governor’s long-awaited decision, handed down during his last days in office, brought a dramatic conclusion to Brown’s plea for mercy, which burst onto the national stage as celebrities and criminal justice reform advocates discovered her case.

In his commutation, the governor called Brown’s case one that “appears to me to be a proper one for the exercise of executive clemency.”

“Over her more than fourteen years of incarceration, Ms. Brown has demonstrated extraordinary growth and rehabilitation,” the commutation said.

It was a remarkable victory for Brown after years of legal setbacks.

Cyntoia Brown speaks to the parole board during her clemency hearing at the Tennessee Prison for Women in Nashville on May 23, 2018. (Photo: Lacy Atkins / The Tennessean)

Brown said she was forced into prostitution and was scared for her life when she shot 43-year-old Johnny Allen in the back of the head while they were in bed together.

Allen, a local real estate agent, had picked her up at an East Nashville Sonic restaurant and taken her to his home.

Brown, who turns 31 at the end of this month, was tried as an adult and convicted of first-degree murder in 2006. She was given a life sentence. Had Haslam declined to intervene, Brown would not have been eligible for parole until she was 67.

“This is truly a joyful moment — for Cyntoia and for all of us who have worked to help her,” a statement from Bone and J. Houston Gordon, Brown’s lead attorneys, said.

“The governor’s decision is proof that our justice system works and it marks the beginning of a new chapter for Cyntoia.”

Faith and political leaders, and celebrities who championed Brown’s cause, were jubilant.

“Oh hallelujah,” said state Sen. Brenda Gilmore, D-Nashville, on being informed of the news Monday morning. “Our prayers are answered. This is so wonderful.”

“I am proud of Tennessee today,” he said. “We also continue to pray for Johnny Allen and his family and his friends for their loss.”

In 2016, The Tennessean in partnership with “Independent Lens,” a PBS series presented by ITVS and Daniel H. Birman Productions, highlighted Brown’s story as as part of “Sentencing Children,” a seven-part series examining Tennessee’s juvenile sentencing laws.

Months later, celebrities discovered her case, fueling intense interest and a renewed legal fight to get her out of prison.

Activists, lawmakers and celebrities, including Rihanna and Kim Kardashian West, have cited Brown’s case as an illustration of a broken justice system. Brown was a victim herself, they said, and didn’t deserve her punishment.

Her impending release sets the stage for her to join their ranks.

During her time in prison, Brown completed her GED and got a college degree from Lipscomb University. Her allies say she hopes to apply her education by supporting social justice issues through her own nonprofit.

Brown already has job offers. Walker, the pastor, said Brown was welcome to work in his church. Her lawyers also want to hire her. Her advocates said they would continue to support Brown after her release.

“We intend to honor Gov. Haslam’s faith in Cyntoia,” Walker said. “We will continue to walk with her.”