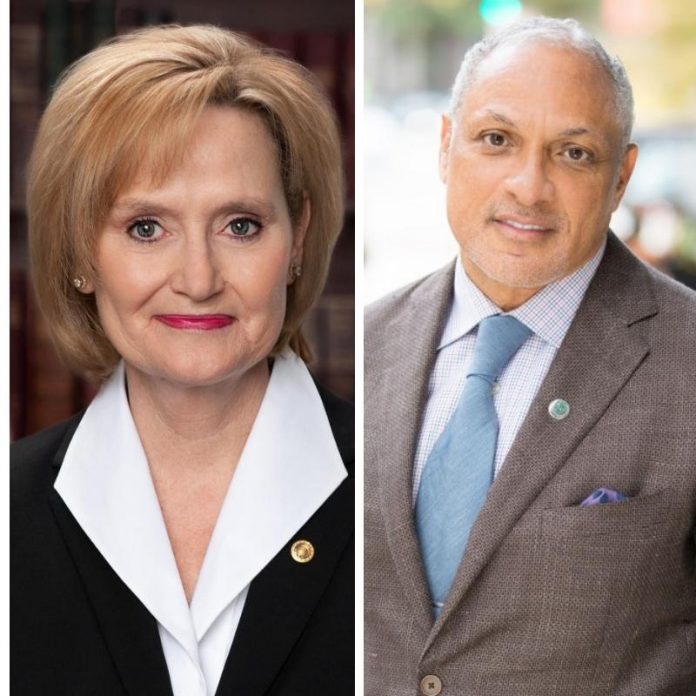 A Democrat running for U.S. Senate in Mississippi says he would bring experience of “diversity” and “inclusion” to the job, and he thinks the Republican he’s trying to unseat has a background lacking in those qualities.

Democrat Mike Espy spoke recently about how he and his twin sister were among the 17 black students who integrated the all-white Yazoo City High School in 1969, graduating in 1971.

An independent newspaper, the Jackson Free Press, reported Friday that Republican Sen. Cindy Hyde-Smith, who is white, attended a white private school founded in 1970, the year many Mississippi public high schools integrated. She graduated from Lawrence County Academy in 1977.

Hyde-Smith campaign spokeswoman Melissa Scallan responded to the report about Hyde-Smith’s high school attendance by saying: “In their latest attempt to help Mike Espy, the gotcha liberal media has taken leave of their senses. They have stooped to a new low, attacking her entire family and trying to destroy her personally instead of focusing on the clear differences on the issues between Cindy Hyde-Smith and her far-left opponent.”
Espy said he was called “the N-word” many days during integration.

“I guess you could juxtapose my experience with her experience,” Espy told The Associated Press between his campaign appearances Saturday in Jackson.

“If the story is correct, she consciously made a decision to separate, and my parents consciously made a decision to be inclusive,” Espy said. “So, that’s a Mississippi I want to be a part of — one of diversity, one of inclusion, one of different experiences. … I decided to use that very difficult time to learn from and try to reach out to people of all races. So, if you compare me and that experience to Cindy Hyde and her experience, I’d rather have my experience.”

The hard-fought Senate race is expected to drive a higher-than-usual turnout for a runoff in Mississippi. President Donald Trump is set to travel to the state for two rallies with Hyde-Smith on Monday.

More than 43,000 absentee ballots have been requested for the runoff, and that number could increase as circuit clerks continue compiling information, the Mississippi secretary of state’s office said Saturday.

About 69,000 absentee ballots were requested before the Nov. 6 election. There’s typically a large decrease in ballots cast between the first election and a runoff.

Saturday was the deadline for in-person absentee voting. Several dozen waited in a line that stretched out of the Hinds County Courthouse in downtown Jackson, including retired home economics teacher Illinois Cox Littleton, 92, who said she voted for Espy because she considers him “a highly intelligent man.”

Hyde-Smith was appointed as a temporary successor to longtime Republican Sen. Thad Cochran, who retired in April. The winner of Tuesday’s runoff gets the final two years of a term he started.

Mississippi has a history of racially motivated lynchings and violence against people who sought voting rights for black citizens, and Hyde-Smith has been sharply criticized after two videos surfaced this month. One showed her praising a supporter at a Nov. 2 campaign event by saying: “If he invited me to a public hanging, I’d be on the front row.” Another showed her Nov. 3 talking about “liberal folks” and making it “just a little more difficult” for them to vote.

Her campaign said the remark about voting was a joke.

Hyde-Smith said the “public hanging” comment was “an exaggerated expression of regard” for a fellow cattle rancher. During a televised debate nine days after that video was published, said she apologized to “anyone that was offended by my comments,” but also said the remark was used as a “weapon” against her.

Yearbook photos from Lawrence Academy, which is now closed, show Hyde was a cheerleader for a team that had a rebel mascot who carried a Confederate battle flag.
The school photos surfaced days after other photos circulated on social media of Hyde-Smith wearing a gray Confederate military-style hat in 2014 when she was state agriculture commissioner and visited Beauvoir, the beachside home in Biloxi, Mississippi, that was the last home for Confederate president Jefferson Davis. Hyde-Smith posted the photos of herself at Beauvoir in Facebook at the time with the caption: “Mississippi history at its best!”

Scallan said the Hyde-Smith campaign had no comment about the Beauvoir photos.