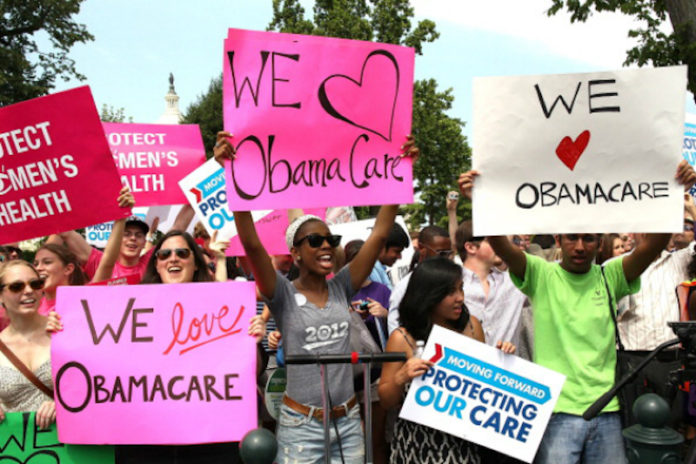 Supporters of the Affordable Care Act gathered to protest the health care law’s repeal in rallies across the country on Sunday.

The demonstrations were in response to an appeal by Democratic leaders in Congress for a day of action against ACA repeal, the defunding of Planned Parenthood and other policies promoted by the incoming Donald Trump administration.

Perhaps the highest-profile gathering was a rally at Macomb County Community College in Warren, Michigan, that drew thousands of people. Sens. Chuck Schumer (D-N.Y.), Debbie Stabenow (D-Mich.), Gary Peters (D-Mich.), Bernie Sanders (I-Vt.) and several other members of Congress addressed the large crowd that had waited in long lines in below-freezing weather to attend the event. Many who have received health insurance thanks to the ACA shared their emotional stories as well.

When Sanders finally took the stage after his colleagues, the roar of the audience and chants of “Bernie, Bernie Bernie” made it clear that for many in the crowd, the Vermont senator was the main attraction. Sanders’ political action nonprofit, “Our Revolution,” live-streamed the event on YouTube and Facebook.

“This is the wealthiest country in the history of the world,” Sanders said. “It is time we got our national priorities right. The United States today and I hope everybody in America understands it: We are the only major country on Earth not to guarantee health care to all people as a right!”

True to his democratic socialist form, Sanders, who won an upset victory against Hillary Clinton in the Great Lakes State presidential primary, went beyond defending the ACA.

“So our job today is to defend the Affordable Care Act. Our job tomorrow is to create a Medicare-for-all, single-payer system,” he exhorted the crowd.

There were some 70 similar rallies across the country, according to Sanders. Photos on social media show significant crowds in Portland, Maine; Richmond, Virginia; Tampa, Florida; Boston, New York City and many other metropolises.

NYC ACA rally. Couple thousand people according to attending police. Where is everyone???? pic.twitter.com/4NXUy5M2GO

Here taking #OurFirstStand with my fellow Tampa citizens fighting for the 1.7M Floridians insured thanks to #ACA #savehealthcare pic.twitter.com/ETEATQCJeJ

Huge crowd in #Boston for rally against #ACARepeal, in support of #Obamacare with @SenWarren @EdMarkey @marty_walsh #bospoli #mapoli pic.twitter.com/f47QaRtl9Y

Other grassroots efforts suggest that the prospect of the ACA being repealed is finally mobilizing Democrats and their allies to take unified, concerted action.

The progressive organizations MoveOn.org, the Working Families Party and People’s Action reported that they were holding 500 “resist Trump” meetings on Sunday.

And on Saturday, over 100 people angry about ACA repeal packed Republican Rep. Mike Coffman’s constituent meeting in Aurora, Colorado. It was a scene that resembled past politically effective moments of protest, including the raucous anti-ACA town hall meetings in the summer of 2009.

Coffman only let people speak to him in groups of four at a time, then sneaked out a side entrance earlier than the event officially ended.