DefenderNetwork.com
Home NEWS National Donald Trump even made Black History Month about himself 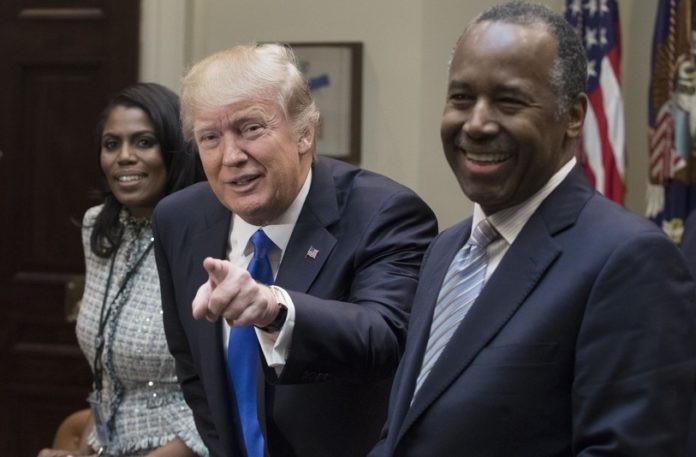 President Donald Trump hosted a “conversation” at the White House on Wednesday to mark the beginning of Black History Month and, unsurprisingly, managed to make part of the discussion mostly about himself.

Trump delivered remarks at the event, which was billed as a listening session, in which he acknowledged the “tremendous history of African Americans in this country.” While the public couldn’t get enough of Trump’s odd description of the legendary Frederick Douglass as “an example of somebody who has done an amazing job and is being recognized more and more, I notice,” he didn’t stop there.

In one part of his speech, Trump briefly acknowledged the life of Dr. Martin Luther King Jr. before he took a jab at the media and made the moment about himself.

Here is a transcript of President Trump's comments on Dr. Martin Luther King at his Black History Month gathering this morning. pic.twitter.com/qHq9i1Ligg

Trump was referencing a story published hours after his inauguration last month that mistakenly reported he had removed a bust of Dr. King from the Oval Office. The report, which was promptly corrected, has been used by Trump and officials within his administration as ammunition in the war he has since waged against the media.

Trump, who was surrounded by a handful of black surrogates at the meeting, also discussed black icons like Harriet Tubman and Rosa Parks before he gave credit to the assembled black supporters for defending him in public and before the media. Among those he praised were Omarosa Manigualt, who served as Trump campaign’s director of African American outreach, and Paris Dennard, whom Trump said has “done an amazing job in a very hostile CNN community.”

“He’s all by himself,” Trump said of Dennard on the network. “Seven people and Paris. I’d take Paris over the seven but I don’t watch CNN, so I don’t get to see you as much.”

“But Fox has treated me very nice,” he added. “Wherever Fox is, thank you.”