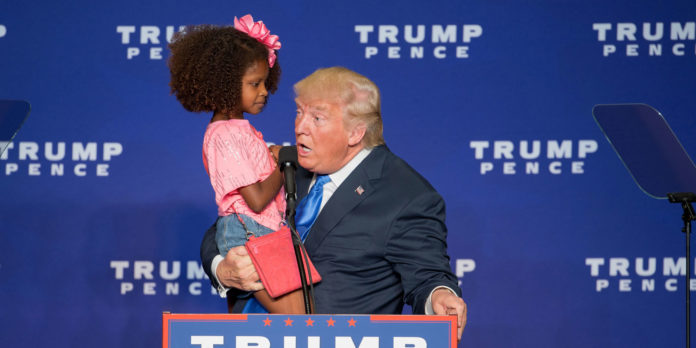 During the final presidential debate on Wednesday night, the Republican nominee made offensive closing remarks that reinforced his racist pitch to “make America great again.”

“We need law and order, our inner cities are a disaster,” Trump said at the debate. “You get shot walking to the store. They have no education. They have no jobs. I will do more for African-Americans and Latinos than [Hillary Clinton] can do in 10 lifetimes. All she’s done is talked to the African Americans and the Latinos.”

There are many problematic parts to Trump’s pitch to black voters. He repeatedly implies that all black people are uneducated, unemployed and that we all live in inner-cities. However, labeling us “the African Americans” is perhaps one of the most offensive things he does because it dehumanizes, disrespects and denigrates black people. He has also previously called African Americans “the blacks.”

Twitter noticed the insensitive comments and expressed their fury and displeasure over his remarks on black voters:

Referring to a diverse community of people as "the African-Americans" shows you have no understanding that they are, in fact, human beings

"The Latinos", "The African Americans", We are PEOPLE, not objects.

Can someone ask #trump — Who in the hell are: The African Americans and The Latinos…. #debatenight

If yo azz say "THE African Americans" one more time 👊🏿 #debatenight

The African Americans and The Latinos want you to know that we're educated and we're employed. #DebateNight