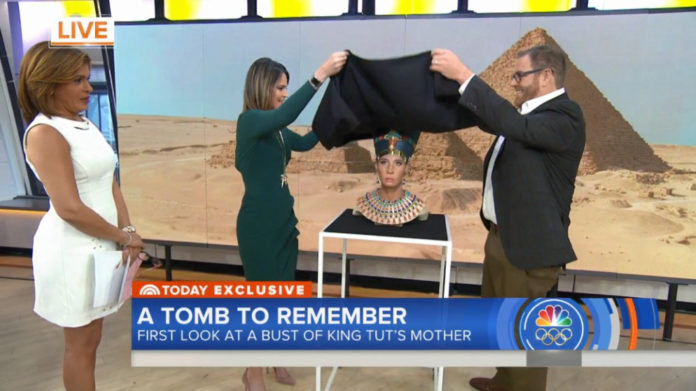 Black History Month has been lit so far! And we are only six days in. But of course, the train of tomfoolery is never late. It arrived yesterday on NBC’s Today Show.

The Today Show decided to do a segment on the Egyptian Queen Nefertiti. Considered to not only be the most beautiful woman in ancient Egypt, she was “co-king” with her son, King Tut. The show decided to honor her (I guess) by revealing what the Pharaoh would have looked like in her day. It turns out that maybe what we thought she looked like was wrong all along.

I had gotten the memo that she was undeniably Black, but not according to Josh Gates. Gates is the TV host of The Travel Channel’s “Expedition Unknown,” and somehow this man was given exclusive access to what is believed to be the remains of King Tut’s mother.

A mummy known as “the younger lady” is held in the Cairo, Egypt museum. Because of DNA tests conducted in 2010, it was proven that this mummy was the mother of King Tut. So, Gates and co. decided to use high-tech imaging to scan the “younger lady’s head for the first time, creating an exact replica, [which became] the basis for a forensic reconstruction.” Gates admitted that reconstructing anyone from the past would be difficult, especially if some biases are involved (Hmmhmm).

“It’s very hard to see people in the past, it’s even harder to see women because they’re so often framed by men,” he said. “So this is an opportunity to see a real woman, a real powerful woman in history brought back to life.”

And here is what Gates has revealed is what Queen Nefertiti looked like. My questions: Where are the cheekbones and the melanin?

Are we getting trolled? I hate to use a Cheeto-In-Chief phrase, but this really is some “fake news.” A white TV host with no scientific credentials to his name and a white female construction artist, Elisabeth Daynes, are claiming that this image is the “true face” of Queen Nefertiti. Isn’t that obvious bias right there?

And shame on the Today Show for airing this trash. I am particularly disappointed in Hoda Kotb, the show’s new host, because she herself is Egyptian. Although she said nothing, Black Twitter had plenty to say. #StayWoke