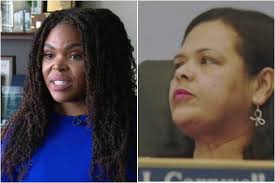 A recent proposal by a Compton, California, resident was denied, and the man who was behind it says it has to do with tensions between a councilwoman and the city’s Mayor Aja Brown.

Chico Brown lives in Compton, and he raised $500,000 for a project to rebuild the city’s infrastructure. The former gang member wanted to rally rival gangs to restore parts of the city, which suffers from numerous potholes, for instance.

“I got guys from East Side Crips, Pirus and Hispanics working together to rebuild this city. I went to the Mayor [and said], ‘Do you think this is possible?’ She said, ‘Yeah, write up a proposal,’” Chico tells “Good Day L.A.” Wednesday, May 22.

The rival gang members were all for it, but when Chico Brown brought the issue before the City Council, Councilwomen Janna Zurita, Tana McCoy and Councilman Isaac Galvan voted it down.

“I thought it was BS. I don’t see how they could turn it down,” said Laron James, a Crip from Compton.

“How could you do that to the people of Compton?” Chico wondered.

But while filming the meeting for a possible documentary, he captured a conversation with Zurita that occurred after the vote.

“That’s what you get for f–king with Aja. That is what it is,” she told Chico. “This is her whole project!”

Chico insisted the mayor has “nothing to do with this,” but Zurita remained firm.

Apparently, Zurita, McCoy and Galvan are all against Mayor Brown. The morning news show requested interviews with each of the council members and they all declined. However, “Good Day L.A.” did manage to catch up with Zurita, and she dismissed the notion that she ever voted down measures because of her issues with the mayor.

“That’s not true! I don’t know where you get your facts from but that is not true! I have never, never not voted to pass something to progress the city of Compton,” Zurita said.

However, according to the Mayor, it is not the first time that proposals she backed were voted down by Zurita, Galvan and McCoy.

“I have experienced bringing on Adidas, bringing projects forward to restore our parks, even to repair our streets and there is a voting block that has voted no against these improvements,” Mayor Brown explains.

The account was backed up by Councilwoman Emma Sharif.

“A lot of the things that I want to bring, or I may suggest, never happen and same things with the mayor because we are not part of the voting block,” she said.

As the council is made up of five members, three votes win the majority.

But the mayor says rallying votes is not legal and is a violation of the Brown Act. The act guarantees the public’s right to participate in meetings involving local legislative bodies.

“For one person to reach out to other members and confirm their vote prior to the vote happening is a violation of the Brown Act and that would warrant an investigation,” she said.