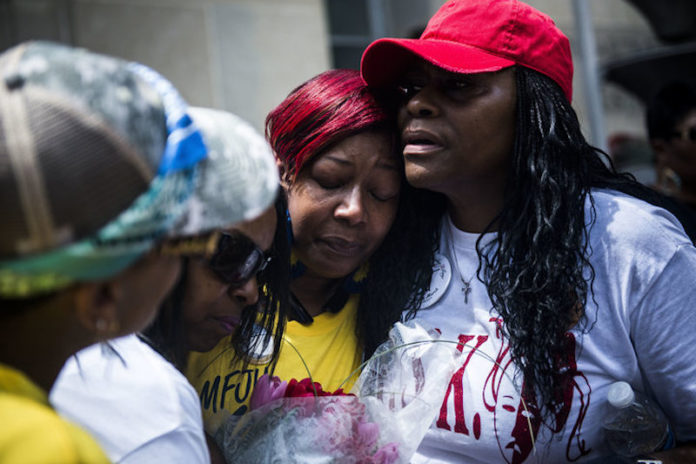 The family of a black man who was unarmed when he was shot dead by police in Milwaukee in 2014 received a $2.3 million dollar settlement, the family’s attorneys said on Wednesday.

Dontre Hamilton’s family settled the claims made in a federal civil rights lawsuit against the city and former Milwaukee Police Department officer Christopher Manney, who is white, the attorneys said in a joint statement.

Milwaukee’s police department has faced criticism in the past over complaints about racial profiling and targeting, and last year the city experienced rioting and arson after a fatal police shooting.

Manney was fired after shooting 31-year-old Hamilton, whose family said he was mentally ill, in a park in downtown Milwaukee in 2014. Manney was not criminally charged by county or federal prosecutors.

Hamilton’s estate filed a lawsuit nearly two years after the incident, alleging his constitutional rights were violated by Milwaukee police and the department had a culture that facilitated misconduct.

Lawyers for the family said in a joint statement that policymakers and courts recognized that Manney violated Hamilton’s constitutional rights “by conducting an illegal pat-down search, which started a chain of events that resulted in the tragic death.”

A spokeswoman for the city attorney’s office said that settlements are recommended in order to avoid the risk of litigation. She offered no further comment. The police department was not listed as a defendant in the case.

Hamilton’s parents and brothers who filed the lawsuit will not benefit financially from the proceeds and the settlement will instead be placed in a fund Hamilton’s son will receive after he becomes an adult, the lawyers said.

The 46-page complaint, filed in 2016, said two officers checked on Hamilton twice during the afternoon of his death as he was resting at a park and determined he was not doing anything wrong.

Manney had been called to check on Hamilton earlier, but was unaware of the checks by the other officers and went to the park, the lawsuit said. When Manney arrived, he conducted a pat-down search of Hamilton without cause.

The two began arguing and Manney then started striking Hamilton with his baton, the lawsuit said. Manney shot Hamilton 14 times after he grabbed the baton.