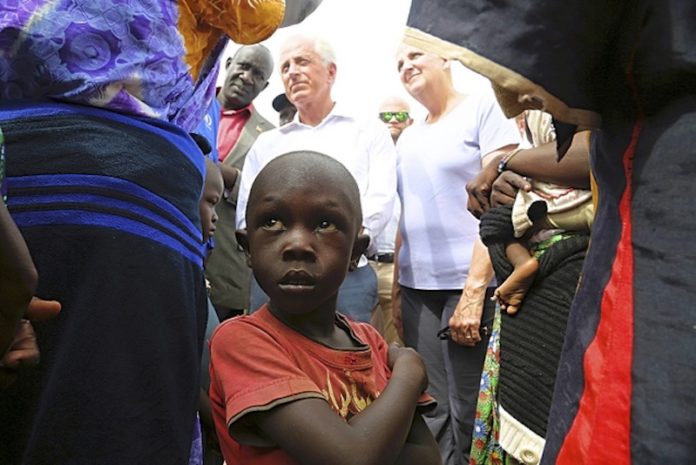 Following a visit to the world’s largest refugee settlement in northern Uganda with the Republican chairman of the Senate Foreign Relations Committee, Democratic Sen. Chris Coons of Delaware told The Associated Press on Saturday that the U.S. “can deliver more food aid at less cost” through foreign food aid reform.

The United States spent roughly $2.8 billon in foreign food aid last year and is the world’s largest provider of humanitarian assistance. But current regulations require most food aid to be grown in the U.S. and shipped under an American flag.

“It’s taken in some cases six months for those products to actually get here,” Republican Sen. Bob Corker of Tennessee told the AP. “We have people coming over the border (from South Sudan). They need food. We can actually buy the food cheaper, use our taxpayer dollars cheaper.”

The two senators on Friday toured a food distribution site at the refugee settlement, which holds more than 270,000 South Sudanese who recently fled the three-year civil war in the East African nation.

The U.N. says South Sudan is part of the largest humanitarian crisis since World War II, with roughly 20 million people there and in Somalia, Nigeria and Yemen facing possible famine. Two counties in South Sudan were declared famine areas in February.

The senators watched as South Sudanese divided sacks of corn and cereals during a food distribution. Behind them, snaking lines of refugees waited for their rations of food that last for 40 days.

The Bidi Bidi settlement is a sprawling complex of mud-brick houses that hold some of the world’s most desperate people. With little respite from the fierce sun, arguments broke out at the food distribution site.

“We don’t have enough food,” said Madra Dominic, one of the waiting refugees. “Right now they are reducing (food).” Uganda’s government has said it is near “breaking point” and that there could be serious food shortages if more outside aid doesn’t arrive.

In March, Trump proposed a budget that would cut 28 percent of funding for diplomacy and foreign aid, singling out the Food for Peace program that funds a majority of U.S. foreign food assistance.

Both Coons and Corker defended humanitarian aid, and argued that lifting restrictions on where foreign food aid is grown and how it is shipped would feed more people.

“Americans have real questions about whether their money is making an impact (abroad),” Coons told the AP.

Last year, Coons and Corker co-sponsored a law which allows flexibility in how a portion of foreign food aid is grown and delivered. About $900 million of food aid now can be grown near the site of a crisis overseas and shipped under any flag.

Roughly $1.2 billion of the U.S. food assistance still carries the restrictions of being grown in the U.S. and being shipped under a U.S. flag. The U.S. Agency for International Development has estimated that the Coons-Corker plan to lift those restrictions would reach 2 to 4 million more people with equivalent funding.

At the same time, a March study by the nonpartisan Government Accountability Office found “certain deficiencies in USAID’s oversight” of the portion of food aid that has more flexibility.

On Wednesday, House Agriculture Committee Chairman Michael Conaway of Texas, a Republican, said in a statement that “demands for even more flexibility are premature” when it comes to foreign food aid. Farm-state lawmakers and shipping companies have long opposed the additional flexibility.

Delivering any food aid inside South Sudan has been challenging, with South Sudanese officials repeatedly accused of restricting humanitarian access and harassing aid workers, while rebels in some cases have abducted aid workers. Some also are targeted in the fighting.

As Corker and Coons met with refugees and toured the food distribution site, the U.N.’s World Food Program announced that three of its contract workers had been killed on Monday in the town of Wau in South Sudan. Two were killed by machete wounds and the third was shot, WFP said.