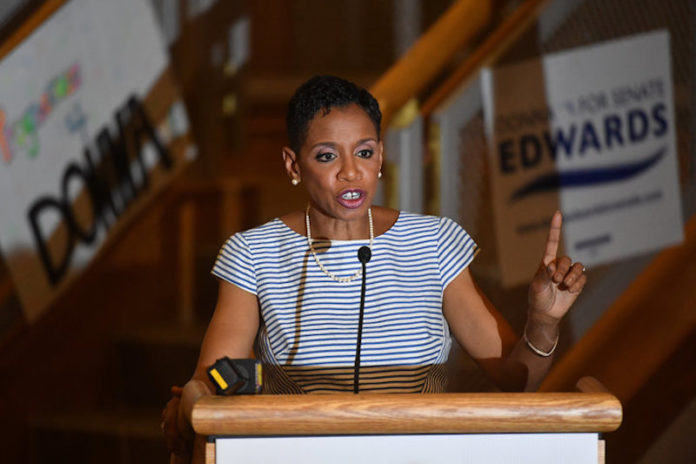 In an open letter revealing she has multiple sclerosis, a former congresswoman appealed to her congressional colleagues to consider her story when deciding whether to repeal the Affordable Care Act.

Former Rep. Donna Edwards (D-Md.) argued in the letter, published Friday evening in The Washington Post, that the Republican attempts to repeal the landmark law endanger her personally given both her medical condition and the economically precarious position in which she finds herself.

Edwards made the case that her diagnosis of a chronic illness despite having a healthy lifestyle demonstrates the importance of protecting people with pre-existing conditions.

“I pray that as you finish doing whatever it is that you are doing with health care, you remember that I was one of your colleagues, that I worked hard and that I don’t have a preexisting condition because I was a bad person who led an unhealthy life,” she concluded the missive. “I have a preexisting condition simply because I do; and I, like millions of other Americans in the same situation, deserve quality, affordable health care.”

Edwards described a life as an avid runner and biker, who began experiencing muscular pains last year that she would later learn were symptoms of the autoimmune disease multiple sclerosis. While she was participating in a Democratic sit-in for gun control legislation on the House floor in June 2016, a House physician called her into his office and told her the diagnosis. Though she was shaken, Edwards recalled, she returned to the sit-in.

Edwards, a senior fellow at New York University School of Law’s Brennan Center for Justice, nonetheless described herself as “not employed.” She currently pays $800 in COBRA payments to keep the health insurance she had as a member of Congress, but that option will run out in June 2018.

“I’m not sure what I’ll do then,” Edwards wrote.

Edwards, who is a single mother, recounted that her financial struggles as a young woman prevented her from affording coverage for a time. Now, Edwards wrote, she again has a personal stake in the debate.

“One reason I ran for Congress was to help make sure no one would have to go through that, and I was proud to be one of the presiding officers when the Affordable Care Act passed. I did not think the law was perfect; I believed it was a good start,” she wrote. “I never thought I could have to go back to a time when I would not have health-care coverage.”

Edwards, a progressive stalwart, ran for an open Maryland Senate seat in 2016. She lost in the Democratic primary to fellow Maryland congressman Chris Van Hollen, who went on to win in the general election. She subsequently retired from the U.S. House, where she had served since 2008.

As an attorney, veteran liberal activist and former member of Congress, Edwards’ career prospects ― and consequent opportunities to receive employer-sponsored insurance ― would appear to be bright.

But many other Americans in her predicament would not be as fortunate without the ACA, commonly known as Obamacare. Obamacare ensured that insurance companies could not deny people coverage for preexisting conditions and created community rating regulations requiring insurers to set premiums regionally, rather than based on individuals’ medical histories.

It also enabled workers living above the poverty line without coverage from their employers to purchase insurance on regulated exchanges. The vast majority of people who buy that coverage benefit from major financial subsidies available to Americans below a certain income threshold.

The Obamacare repeal bill currently being considered by the Republican-dominated Senate would dramatically reduce the subsidies available to Americans who purchase coverage on the exchanges. Much of the savings from those reductions and massive cuts to Medicaid would go toward the cost of undoing taxes on the wealthy and corporations that were part of Obamacare.

The nonpartisan Congressional Budget Office estimates that as a result of the changes in the Senate bill, 22 million fewer Americans would have insurance over a ten-year period. That is only a modest improvement over a bill that passed the House in May, which CBO projects would result in 23 million fewer insured Americans.

The CBO score of the bill late last month spooked many Republicans, prompting Majority Leader Mitch McConnell (R-Ky.) to delay a vote until after the July Fourth congressional recess.