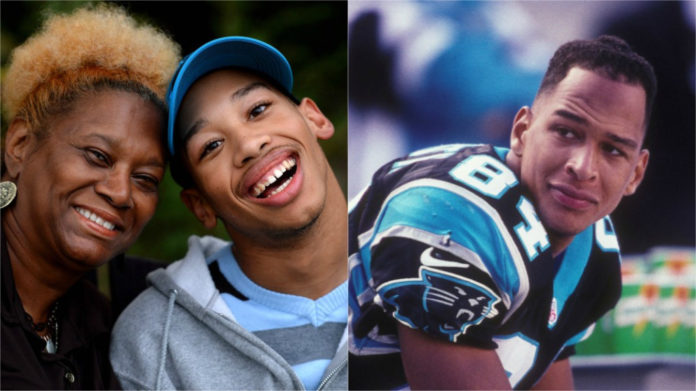 In 1999, Carolina Panthers football star Rae Carruth had been seeing a young woman named Cherica Adams. When she became pregnant with their son, Carruth, not wanting her to carry a child to term, hired Van Brett Watkins and Michael Kennedy to murder her. The hit took place when Adams was in a car, following behind Carruth near his home in Charlotte. When he stopped abruptly on the road, Watkins and Kennedy pulled up alongside Adams and fired into her vehicle. She was shot four times.

Adams was able to tell police what happened, but soon after being taken to the hospital, she fell into a coma. Their child was delivered through emergency C-section. Adams was to succumb from her injuries, but her son, Chancellor Lee Adams, would survive and be permanently disabled due to the effects of the attack. He has cerebral palsy and is cared for by his grandmother, Saundra Adams. His father was sentenced to 18 to 24 years in prison for his role in Cherica’s death.

For the first time, Carruth, still in prison but now 44, has decided to open up about his poor choices. In a lengthy letter to Saundra and in a phone interview with local news station WBTV, he spoke about accepting responsibility for the decision he made that hurt so many.

“If I could change anything, I’d change the whole situation,” he continued. “His mother would still be here and I wouldn’t be where I’m at. So that’s what I’d want to change. I want the incident to never have happened at all.”

But there’s always a catch to moments like this.

Carruth also used the opportunity to clear up some things about his relationship with Cherica, for “peace of mind” purposes. He claims that it has been incorrect for him to be identified as her boyfriend at the time of her death. According to him, they had a physical relationship but were “practically strangers.” He set the deadly shooting in motion not because he didn’t want to pay child support, but because she didn’t want to have an abortion.

The other catch is that he is supposed to be released from the Sampson Correctional Institution on October 22 of this year after being incarcerated since 2001. And with a release date looming, he said to both Saundra and WBTV that he wants to have custody of his son when he’s finally out and finally ready for that responsibility.

He’s reportedly sent visitation papers to Saundra, but according to WBTV, hasn’t received a response.

She has since said in an interview with the Charlotte Observer that Carruth may be able to build a relationship with his son upon his release, but he will never have custody of the now 18-year-old whose life he tried to take before it began.

“I’ve forgiven Rae already, but to have any type of relationship with him, there does have to be some repentance,” she said. “And I think this opens the door. But I can say definitively he’s not ever going to have custody of Chancellor. Chancellor will be raised either by me or, after I’m gone, by someone else who loves him and who knows him. He will never be raised by a stranger – someone he doesn’t know and who tried to kill him.”