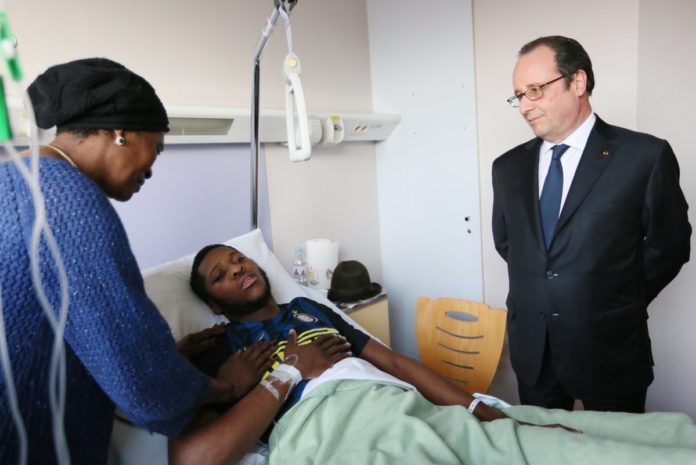 French investigators said Thursday that the police officers in Paris who sodomized a young black man with a baton did so accidentally, and that the incident does not constitute rape.

The 22-year-old youth worker, identified only as Théo, says a group of four police officers physically and sexually assaulted him on Feb. 2. He says he confronted the officers after seeing one of them slap a young person during an identity check. Then, Théo says, the officers took him around the corner and sodomized him with a truncheon, spit on him, beat his genitals and called him names, including “negro” and “bitch.”

Police have claimed Théo’s pants “slipped down on their own” and his wounds were sustained accidentally, according to French media reports. An early investigation by France’s national police force concluded that the incident, while “very serious,” was “not a rape” due to the “unintentional character” of the officers’ actions.

Video shows an officer “applying a truncheon blow horizontally across [Théo’s] buttocks,” a police source told The Local. While investigators acknowledge that Théo was penetrated, they say it was unintended.

Huge demonstrations against police brutality and racism have spread through Paris’ Aulnay-sous-Bois suburb and surrounding communities in the week since the incident. Cars were set ablaze in the streets and dozens of people were arrested as protesters clashed with law enforcement night after night.

Théo and his family are urging the community to act peacefully.

“I would like to ask the residents of my neighborhood to calm down. I ask them to stop the hostilities because I love my city, and I want to find it the way I left it,” Théo told the French news station BFMTV from his hospital bed this week. “Violence is not the way to support me. Justice will do its job.”

“The call for calm launched by Théo before yesterday was heard. But tensions remain palpable,” he wrote. “Justice must be able to work in complete transparency and in complete serenity.”

French President François Hollande visited Théo in the hospital on Tuesday, later tweeting that “Théo reacted with dignity and responsibility” and that justice “has been seized.”

Others on social media are using the hashtag #JusticePourTheo (“Justice For Theo”) to express their support and outrage.

The world is praying for you Theo #JusticeForTheo #Paris #France