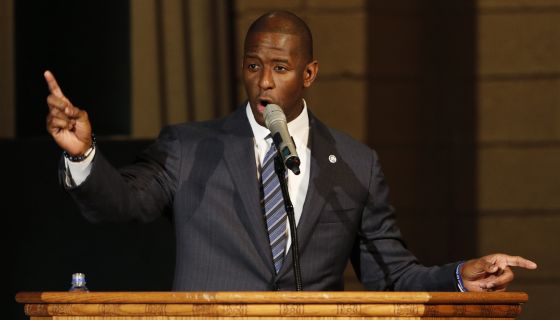 “If we don’t swear in a new governor until January, what is the rush for you? Count every vote,” Gillum said. “They’re claiming voter fraud because supervisors of elections are counting votes.”

That statement was in response to Trump’s tweet on Monday morning. The president stated, “The Florida Election should be called in favor of Rick Scott and Ron DeSantis in that large numbers of new ballots showed up out of nowhere, and many ballots are missing or forged. An honest vote count is no longer possible-ballots massively infected. Must go with Election Night!”

Gillum continues his fight to become Florida’s first African-American governor in a race that was too close to call. Unofficial results showed that DeSantis led Gillum by 0.41 percent, ABC News reported. Under Florida law, election officials ordered a machine recount on Saturday because the vote margin was less than 0.5 percent. All 67 counties face a state-ordered deadline of Thursday to finish their recounts.

Meanwhile, Gillum isn’t alone in calling out Trump. Circuit Chief Judge Jack Tuter declared on Monday that there’s no evidence of voter fraud in the recount.

However, Gillum told his audience that there were voter suppression issues during the election, as well as some irregularities. In one instance, a heavily Republican district allowed 150 voters to scan and email their ballots, which violated state law.