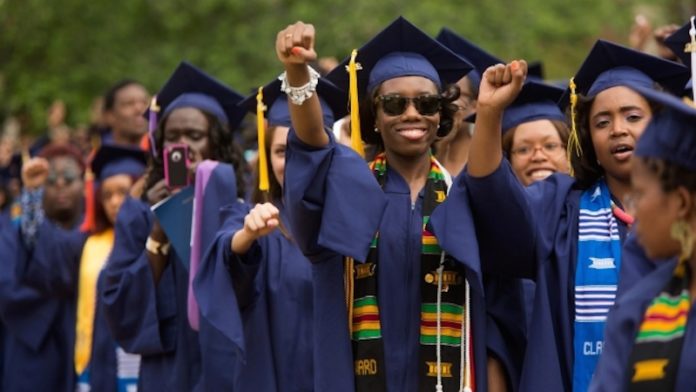 Students who attend historically black colleges and universities (HBCUs) in the United States are confident that First Amendment rights are secure, but are more likely than other college students to favor limits on First Amendment press freedoms during campus protests, a Gallup report has found.

The report, sponsored by the John S. and James L. Knight Foundation and the Newseum Institute, is a follow-up to an April survey of 3,072 U.S. college students (including HBCU students)on their views of First Amendment rights. The new report compares findings from the national sample with responses from 302 full-time students at HBCUs, as well as 357 black students at other colleges.

The report shows that while a large majority (75 percent) of HBCU students view freedom of the press as secure, 56 percent– double the percentage of national college students at 28 percent – believecollege students should be able to prevent reporters from covering campus protests. Correspondingly, HBCU students express less trust in the media than the national sample.

This study sought to better understand how U.S. college students interpret their First Amendment rights, and the role that their environments and backgrounds play in shaping their views. Florida Agricultural and Mechanical University (FAMU) hosted a student panel discussiontodayat 11 a.m. ET on “Free Speech on HBCU Campuses” to discuss the findings of the report. You can watch the video at: http://kng.ht/2cGdPyA.

“Amid intense debates around free speech on campus, these findings highlight a deeper story behind student perceptions of the First Amendment. They have the potential to help fuel a more informed debate around these important rights and open new avenues for further study,” said Sam Gill, Knight Foundation vice president for learning and impact.

Among the other key findings:

HBCU students and black students at non-HBCU colleges are generally confident in the security of First Amendment rights, but they are less likely than the national sample to believe these rights are secure

• HBCU students are confident in the security of each of the five First Amendment rights, particularly freedom of the press (75 percent), freedom of religion (62 percent), and freedom of speech (60 percent).

• Race significantly relates to perceptions concerning freedom to assemble. HBCU students (45 percent), as well as black students at non-HBCU colleges (40 percent)are much less likely than the national sample (66 percent) to believe the right of people to assemble peacefully is secure. In fact, more HBCU students describe freedom of assembly as threatened (54 percent) than as secure.

HBCU students are similar to the national sample in that the majority support free speech and press rights, but HBCU students and black students at non-HBCU colleges are slightly more likely to entertain restrictions

• Students at HBCU schools (56percent) are more likely to agree that their campuses are open environments for free speech. In contrast, a slight majority(54 percent) of the national sample say the climate on campus prevents some people from saying what they believe because others might find it offensive.

HBCU students trust the press even less than the national sample; views mixed on social media

• The large majority of HBCU college students, 73 percent responded that they have little or no trust in the media to report the news fairly and accurately, compared with 59 percent of the national sample.

• HBCU students are however much more likely than the national sample of college students to view their student-run media as playing a very important role in creating a place for an open exchange of ideas on campus, 51 percent to 24 percent, respectively.

“Freedom of the press, speech and assembly were traditionally seen as critical to minority groups who wanted to express their grievances. However, this study reveals that African-American students are more likely to favor restrictions on the press when covering campus protests than their white counterparts. African-American students are also more skeptical of the press’ ability to report in an unbiased manner. Students at HBCUs also believe that the right to assembly is threatened. We clearly need to understand how all Americans can enjoy their First Amendment rights so that we can, among other things, make progress on the issues that divide us,” said Jeff Herbst, president and CEO of the Newseum Institute.

Considered together, these surveys of college students provide a unique and complex view of First Amendment rights on campuses today, highlighting that environments and backgrounds play a part in shaping views on free speech. Importantly, the studies reinforce that perceptions of the First Amendment are changing in face of new information needs, an evolving media landscape, and important national debates on race and diversity.

HBCU Student’s Views on College Campuses is the second of a three-part, Knight-funded program, that will result in a “Guide to Free Speech on Campus” to be published later this year.The full report with methodology can be found at http://kng.ht/hbcuspeech.

This report is part of Knight Foundation’s efforts to promote press freedom and information access, and ensure that the rights guaranteed under the First Amendment are preserved. Knight Foundation has made many investments in this area, and recently supported the launch of the Knight First Amendment Institute in collaboration with Columbia University.