DefenderNetwork.com
Home NEWS National Houston homeowner on why he refused arrest after being mistaken for fugitive 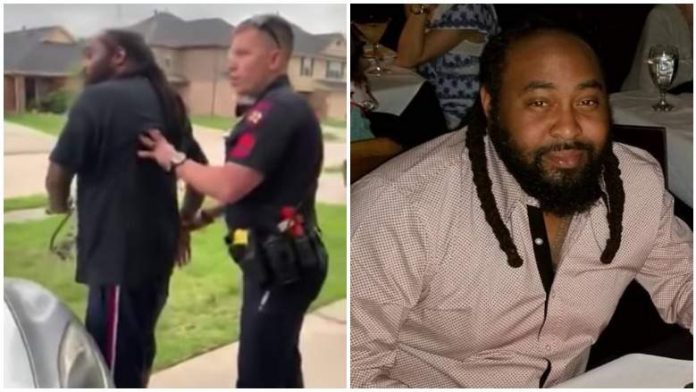 A Houston father was faced with a tense confrontation with a deputy who accused him of being a fugitive from Louisiana. Now, the deputy’s precinct is investigating.

Clarence Evans was in the yard tossing a ball with his 6-year-old son on May 8 when a deputy arrived at his home.

“He said there was a report of a stolen dog,” Evans told KPRC. “Then he asks me for my ID, and I said I felt I didn’t need to give that.”

It was after his refusal, Evans said, that the officer, who has been identified as Deputy Garrett Lindley, “grabbed me.” Then his wife Kelly Evans began recording the now-viral Facebook video about a minute into the confrontation.

As Lindley continued to call Clarence Evans “Quentin,” a reported felony fugitive from Louisiana, the father of two repeatedly denies that he is the suspect, telling the cop he has the wrong guy.

“My name is not no f–king Quentin!” Clarence Evans shouts after asking how he could be a Louisiana fugitive when he’s not from that state.

“Then, well, let’s just see the ID and we’ll be done,” Lindley says. He later repeats the statement several times as Clarence Evans, who continuously points out the officer is shaking, remains adamant that he is not the suspect.

“You walked up and called me three different names!” Clarence Evans says. “You don’t even know my name and you told me I got a warrant in Louisiana! … You think I look like him ’cause I got dreads or something?”

The homeowner then turns his attention to explain that the reported stolen dog belongs to the family. Later on in the video, a second deputy arrives on the scene. He hands the deputy attempting to apprehend Clarence Evans his phone and that deputy shows the homeowner a photo of the suspect.

“Doesn’t that look a lot like you?” the deputy asks.

“No! That don’t look like me! What the f— is wrong with you, man?!” Evans shouts. “You trying to say because I’ve got dreads and I’m black that’s me?!”

Clarence Evans gave a further description of his account in the video caption.

“I’m outside with my son and daughter watching them play when this racist-ass constable from precinct 4 pulls up in front of my house and tells me someone called in about my dog being stolen,” Clarence Evans says. “I tell him that’s impossible cuz I have his paperwork plus I have a chip in him. He then asked for Id and I politely tell him no he then says to me ‘put your hands behind your back Reg’ I have never in my life went by that name then he tells me I have a felony warrant out in Louisiana and calls me Quentin.

“Then once his partner pulls up he shows me a picture of a black man in his 50’s with dreds. So clearly this mf just saw a black man with dreds and think we all look alike. Now I see how unarmed innocent black men get shot down by cops, it’s no way I was letting him get my hands behind my back because he was to nervous and shaking so I knew he was scared next thing you know he goes for his weapon and shoots me in my back and say he feared for his life, He was gone have to shot this black man while looking me in my face. #notquintin,” he concluded.

“What he’s guilty of is being black while watching his kids,” Lewis said at a press conference.

Clarence Evans said Lindley “needs to lose his job. We don’t need cops like him on the street profiling people.”

When asked why he didn’t show his ID, he said he didn’t believe it would help. However, he ultimately complied and the officers left afterward.

“The deputy was there on official business based on a report that a wanted fugitive was near the location,” the statement read. “The deputies left when they determined that this man was not the suspect they were seeking.”

The precinct’s Constable Mark Herman said his precinct’s deputies were simply doing their jobs and did them them calmly.. telling local news station FOX 26 was an “uncooperative, vulgar-mouth citizen” who shouldn’t behave that way toward law enforcement.