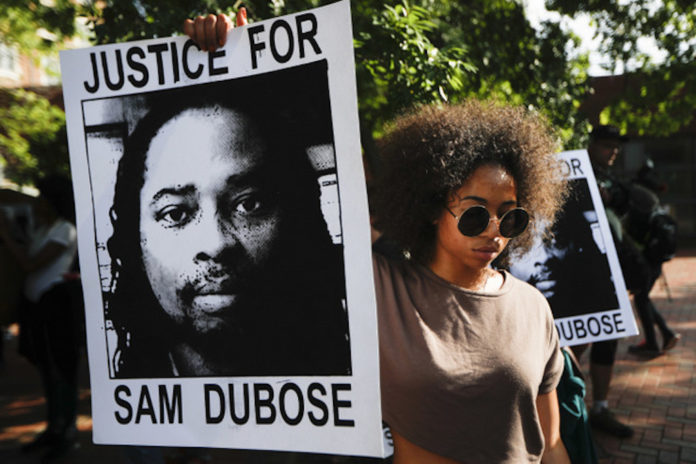 ALBUQUERQUE, N.M. (AP) — As many in the United States celebrate the Fourth of July holiday, some minorities have mixed feelings about the revelry of fireworks and parades in an atmosphere of tension on several fronts.

How do you celebrate during what some people of color consider troubling times?

Blacks, Latinos and immigrant rights advocates say the aftermath of the 2016 presidential election, recent non-convictions of police officers charged in the shootings of black men, and the stepped-up detentions of immigrants and refugees for deportation have them questioning equality and the promise of life, liberty and the pursuit of happiness in the United States.

Filmmaker Chris Phillips of Ferguson, Missouri, says he likely will attend a family barbecue just like every Fourth of July. But the 36-year-old Black man says he can’t help but feel perplexed about honoring the birth of the nation after three officers were recently cleared in police shootings.

Since the 2014 police shooting of unarmed teenager Michael Brown in Ferguson, Missouri, officer shootings — of Black males in particular — have drawn scrutiny, sparking protests nationwide. Few officers ever face charges, and convictions are rare. Despite video, suburban St. Paul, Minnesota, police officer, Jeronimo Yanez, was acquitted last month in the shooting of Philando Castile, a Black man. The 32-year-old school cafeteria worker was killed during a traffic stop July 6, almost a year ago.

“Justice apparently doesn’t apply to all people,” said Phillips, who saw the protests that roiled his town for weeks following Brown’s death. His yet-unreleased documentary “Ferguson 365” focuses on the Brown shooting and its aftermath. “A lot of people have lost hope.”

Unlike Phillips, Janette McClelland, 65, a Black musician in Albuquerque, New Mexico, said she has no intention of celebrating July Fourth.

“It’s a White man’s holiday to me. It’s just another day,” McClelland said. “I’m not going to even watch the fireworks. Not feeling it.”

McClelland, who grew up in Los Angeles during the urban unrest of the 1960s, said she fears cities may see more violence amid a feeling of helplessness.  “I’m praying and trying to keep positive,” she said.

Immigration was a key issue during the presidential campaign for both parties. Since then, Trump’s administration has stepped up enforcement and instituted a scaled-back partial travel ban that places new limits on entry to the U.S. for citizens of six Muslim-majority countries. The temporary ban requires people to prove a close family relationship in the U.S. or an existing relationship with an entity like a school or business. On Friday, the administration announced that Immigration and Customs Enforcement would arrest people – including relatives – who hire smugglers to bring children into the U.S. illegally.

Patricia Montes, a Boston resident and immigrant from Honduras, said she’s grateful for the opportunities and security the United States has given her. Yet this year, she doesn’t know how to approach the Fourth of July holiday.

Montes said it pains her to see children fleeing violence get turned away and deported back to Central America without due process. She also is disturbed by recent immigration raids in Latino and Muslim communities that spark more fear and uncertainty.

In Texas, Latino activists have been protesting a state law that forces cities and towns to cooperate with federal immigration authorities. In New Mexico and Michigan, immigrant advocates have been rallying on behalf of Iraqi refugees facing deportation.

“There’s a lot not to be proud about when celebrating the Fourth of July,” said Janelle Astorga Ramos, a University of New Mexico student and daughter of a Mexican immigrant. “Even though it’s a time to celebrate as a country and (for) our unity, it’s definitely going to be on the back of our minds.”

Despite those problems and concerns, Ramos said her family will recognize the holiday and visit Elephant Butte, New Mexico, a popular summer destination.  “This is our home,” Ramos said.

Isabella Baker, a 17-old Latina from Bosque Farms, New Mexico, said she’ll celebrate the holiday based on her own views of patriotism.

“More people are standing up because of the political climate,” Baker said. “That makes me proud.”

For months, members of the Standing Rock Sioux were at the center of a protest against an oil pipeline in North Dakota. A protest camp was set up. The tribe said the Dakota Access oil pipeline plan could pose a threat to water sources, if there were a leak, and cause cultural harm. Police made more than 700 arrests between August 2016 and February 2017. The Trump administration approved the final permit for the $3.8 billion pipeline, which began operating June 1.  The pipeline moves oil from western North Dakota to a distribution point in Illinois. Four Sioux tribes are still fighting in federal court to get the line shut down.

Ruth Hopkins, a member of South Dakota’s Sisseton Wahpeton Oyate tribe, said Native Americans have always viewed the Fourth of July with ambivalence, and this year will be no different.

However, there will be celebrations.

Her Lake Traverse Indian Reservation holds an annual powwow on July 4 to honor veterans as a way to take the holiday back, she said.

“Also, a lot of people up here use fireworks and the holiday to celebrate victory over Custer for Victory Day,” said Hopkins, referring to Sitting Bull and Crazy Horse defeating George Custer and his 7th Cavalry at the Battle of the Little Big Horn.

Still, the holiday comes after tribes and others gathered in North Dakota to support the Standing Rock Sioux tribe and its fight against the pipeline, Hopkins said. Because of that, water and land rights remain on peoples’ mind, Hopkins said.

Gyasi Ross, a member of Montana’s Blackfeet Nation and a writer who lives on the Port Madison Indian Reservation near Seattle, said all the tensions this Fourth of July are a blessing because it has awakened a consciousness among people of color.

“The gloves are off,” Ross said. “We can’t ignore these things anymore.”

However, Ross said he wants his young son to be hopeful about the future. They will likely go fishing on the Fourth of July.

“I still worry about getting shot or something like that,” Ross said. “All this stuff is so heavy to be carrying around.”