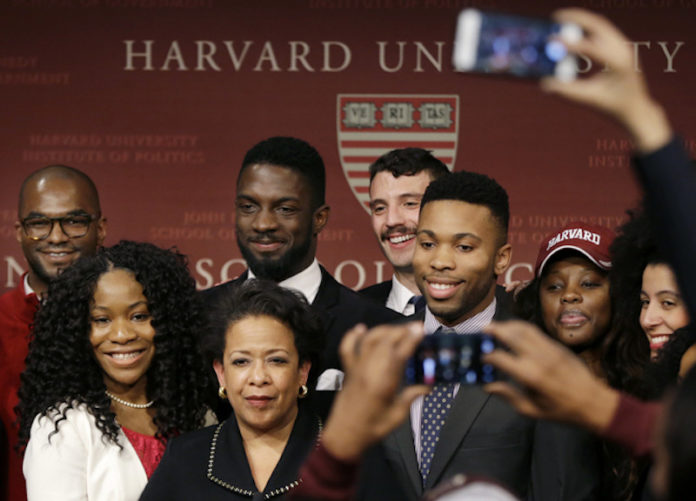 Former U.S. Attorney General Loretta Lynch on Friday encouraged her successor to remember the American people are the Department of Justice’s clients, not the president or Congress.

“I would urge people who are taking over the department now to remember this is the Department of Justice for everyone,” she said, without mentioning Attorney General Jeff Sessions by name. “As you look at the rule of law, it’s not just words on the page. It’s the impact on people’s lives.”

Lynch spoke at a conference organized by Harvard’s Kennedy School of Government. The forum is focusing on pressing issues facing blacks in America.

Former President Barack Obama appointed Lynch to serve as attorney general in 2015, succeeding Eric Holder. The first black woman to run the department, Lynch said Friday she understands each administration has different priorities and different ways of seeing things, adding how she wanted to open up the department to empower people. But she urged her successor to remember he is responsible for the safety, wellbeing and health of all Americans.

When she was asked by a student about her biggest mistake as an attorney or as the attorney general, Lynch referred to her now-infamous meeting last summer with former President Bill Clinton, when the Department of Justice was investigating his wife, Democratic presidential candidate Hillary Clinton.

“That was a very public mistake on my part,” she said and added how it was not an excuse to say she was caught off guard by the meeting.

“When you make a mistake, you have to admit it and acknowledge the problem it causes,” Lynch said.

The 57-year-old North Carolina native graduated from Harvard College in 1981 and Harvard Law School in 1984.

She told students about her time at Harvard Law working in the legal aid bureau and how she had the opportunity to help everyday people with their problems, including a woman she helped to get a divorce.

“Which sounds sad, but she was the happiest client I have ever had,” Lynch joked.

Such experiences, she said, taught her to put herself in other people’s shoes and understand their points of view and concern. She noted that it “has become extremely hard” today for people to really relate to others “because the examples of leadership we are seeing today are not doing that either.”

Lynch praised Obama for his ability to “empathize with situations and conditions” and to step back and find objective solutions.

Lynch acknowledged the U.S. has always been divided, but said she believes people have never felt so free to be “so uncivil about it.”

“So we descend into vitriol and we descend into sort of political name-calling and I think people on both sides of an issue write the other opinion off as something that’s ill-informed and uneducated,” she said. She urged students to put themselves in someone else’s shoes and ask, “What are people so afraid of?”