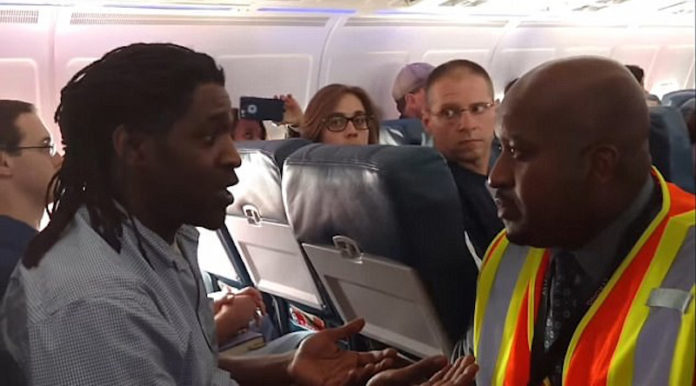 Kima Hamilton had to use the bathroom, urgently, on a flight from Atlanta to Milwaukee, and that was what got him kicked off the flight.

Hamilton told NBC News that he had spoken with a flight attendant about his situation as the plane was taxiing and getting ready for takeoff. The flight attendant explained that if he was in the bathroom, the plane would lose its spot in the takeoff queue, so Hamilton sat back down. However, his need was urgent enough that finally, he had to get up and use the bathroom. He was only gone for about a minute, but when he returned to his seat, he heard “an announcement that we are returning to the gate to remove a passenger.”

Fellow passenger Krista Rosolino wrote a blog entry about the matter, saying, “Everyone was shocked — what could have happened? [Hamilton] quickly spoke up and apologized, saying he thought it was him, and he explained to those of us nearby what had happened.”

When the plane returned to the gate, a Delta employee boarded the flight and told Hamilton to get his things and come with him. Considering the recent news stories about people being removed from airlines, Rosolino began filming as Hamilton calmly explained to the employee what had happened and asked for an explanation for his removal.

“Mr. Hamilton was never confrontational. He was very polite. He only asked for clarification throughout,” Michael Rosolino, Krista Rosolino’s husband, told WMJ4.

Hamilton explained his side of the situation, and the employee explained that the plane could not take off when a passenger was out of their seat because that passenger could be injured. So when the employee said that Hamilton had to leave to discuss the matter, Hamilton was frustrated, not sure what was left to say.

“Mr. Hamilton offered to get off the plane and the passengers around him said, ‘No. We’re getting off with you,’” Krista Rosolino told NBC News.

Eventually, everyone deplaned, and TSA and FBI agents were waiting to speak to Hamilton when they did. He was refunded half the price of his ticket and bought one twice the price from Southwest, but he was unable to get his luggage and was asked to pick it up in Milwaukee.

“In that environment I’m at their mercy,” Hamilton told NBC affiliate TMJ4 earlier Thursday. “I’m a paying customer, but I have no say. Being in the body I’m in, as a black man, I’m already so aware of people and situations around me. I knew something weird was happening. The blessing in that moment is that there were other people there who were able to see it, and call it for what it was.”