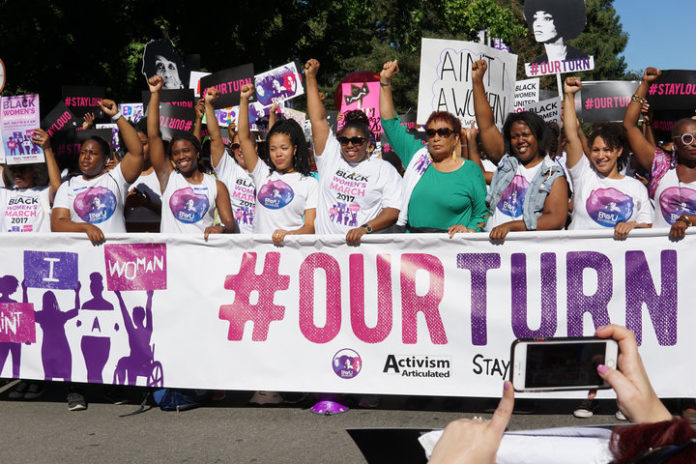 More than 1,500 people gathered on Saturday to participate in a black women’s rights march in Sacramento.

The march was organized by Black Women United, a non-profit organization “dedicated to the education, protection, and advancement of Black women.” BWU, founded in February, came up with the “Ain’t I A Woman” march as a way to include black women more in today’s women’s rights movement.

The event was intended to uplift and empower black women while highlighting the multitude of issues affecting them. Imani Mitchell, one of the organizers, told HuffPost that the overwhelming whiteness of the Women’s March in January left many black women feeling as though the event wasn’t for them.

This was the most important sign at the #womensmarch. We have work to do. (via @eboneedavis)

“This event we had is kind of a response to the Women’s March back in January. More so, though, we just wanted to continue the conversation but with a focus on black women and black women’s issues,” Mitchell said. “I love being a black woman and I love black women and I felt that an event like this was needed and in many ways therapeutic for some black women when everyday it feels as though resisting is a struggle.”

The name of the march comes from Sojourner Truth’s famous 1851 “Ain’t I A Woman” speech, in which the activist stated that black women are erased from the conversation about women’s rights time and time again.

“I have borne thirteen children, and seen most all sold off to slavery, and when I cried out with my mother’s grief, none but Jesus heard me! And ain’t I a woman?” Truth said.

“In many ways it’s unfortunate that it’s appropriate but it is appropriate,” Mitchell told. “She had to really affirm herself and now here we are in 2017 as black women still feeling like we have to affirm that we deserve to be heard, we deserve to be seen, that our voices should be lifted and elevated. I feel, also, ‘Ain’t I A Woman’ works perfectly for trans women, specifically trans women of color. Because they, as well are having to constantly reaffirm their womanhood and not only just their womanhood but their humanity.”

“A lot of black women, for once, felt recognized and they felt heard and they did really truly feel united,” Mitchell said. “So I think overall and here in Sacramento, I’m just getting this great response of sisterhood and that’s exactly what I wanted for this march”

Mitchell said she hopes BWU can help bring black women’s rights marches to other cities and emphasize the importance of their voices everywhere.

“I would ask people to recognize that it’s our turn. We want you to understand our unique experience and respect our voice and that we want to use it,” she said. “I also invite those people if you’re undecided and you feel like you don’t know enough about something to get behind the black woman as well look for black women or women of color in your community that are leading get behind them, support them in the best way you can.”