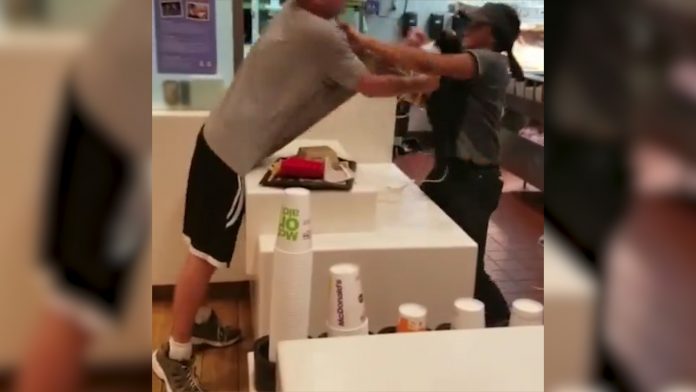 Yasmine James, the McDonald’s worker who was viciously assaulted by a male customer over a straw, is on leave after the Dec. 31 incident. Some outlets, including ours, said she has been fired, but James confirmed that is not the case.

She has also, according to WFTS News, hired a lawyer.

On New Year’s Eve at the McDonald’s located on 34th Street South in St. Petersburg, Ms. James was physically attacked by Daniel Taylor, a customer who became enraged after being told of the restaurant’s ‘no straw in the lobby’ policy, simply meaning straws are only offered to customers upon request. Taylor, refusing to believe Ms. James, proceeded to berate her, hurling vulgar and discriminatory names at her, while threatening physical violence in front of her colleagues and other customers.

Ms. James’ attempts to de-escalate the situation were met by more violence, as Taylor forcefully grabbed her by the collar, dragging her over the top of the counter. Ms. James was left to defend herself, as no one immediately stepped in to help. While Taylor was arrested, the McDonald’s corporation has yet to release a statement about the incident and has placed Ms. James on leave. This case is a clear example of how white privilege and male privilege too often leave Black women alone to defend themselves in the face of harm. I’m grateful that Ms. James has entrusted me with her case; she’s not alone in the fight anymore.

James also talked about her ordeal for the first time.

“I didn’t have any control over my body when he grabbed me,” she told WFTS. “Like I’m scared, like why are you grabbing me, I just didn’t understand his intentions. Even though we were having a verbal conversation, I don’t think it was that for him to grab me.”

James confirms that she was not fired and says that she also does not blame her manager, who took his share of online criticism for not immediately coming to her defense and for seemingly trying to appease the customer who assaulted her. She says that the staff simply didn’t know what to do and had no protocol for how to handle the attack.

“I am committed to using this horrible experience as means to fight for justice, not only for myself, but for other women experiencing this kind of violence in environments where they should be safe and protected. I am so grateful for the outpouring of support I have received from all around the country. I am aware this type of violence happens to women, especially Black women, everyday,” James said.

Video footage of the attack went viral showing an irate white male customer grabbing James and yanking her over the counter. The violent patron was later identified by St. Petersburg police as 40-year-old Daniel Willis Taylor of Clearwater, Florida. He was arrested and charged with 2 counts of misdemeanor assault.

“I want her ass fired right now,” Taylor is heard saying in the clip after another employee pulled him away.

When Taylor initiated his attack, James defended herself by pounding on his face as the holds the collar of her uniform.

“No, you’re finna go to jail,” yells James after the two are separated. “You put your hands on me first!”

“I couldn’t control you,” replies Taylor. “I was just asking you a question, bitch!”

Brenda Biandudi, the mother of the man who posted the video to Facebook, told WFLA that the fight began when Taylor complained there were no straws at the drink station. That’s because of a newly passed St. Petersburg ordinance that states “plastic straws can be given only upon customer request”— in effort to increase the city’s sustainability.

Taylor reportedly assaulted another female employee, Tateona Bell — who he kicked in the abdomen, as he was being escorted out of the eatery by police.

“The victim was kicked in the stomach by the defendant and was complaining of pain,” the police report stated. “The defendant was a customer at McDonald’s, and the victim is an employee. The defendant was being escorted out of the business by management due to him battering another employee, and causing a disturbance.”

Meanwhile, rumors that James was fired by McDonald’s corporation are said to be untrue.