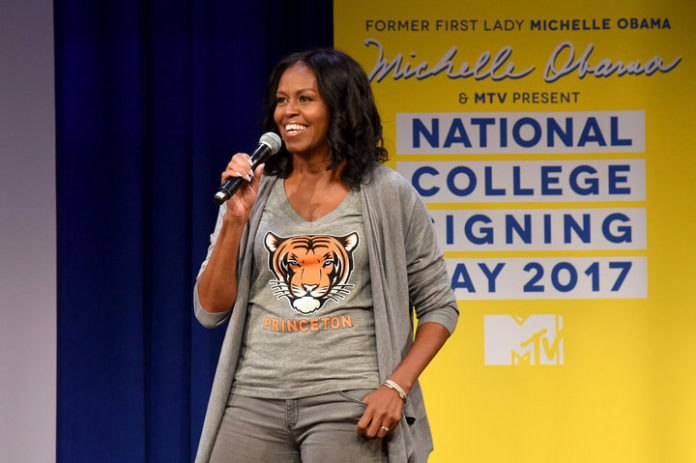 On Friday, the former first lady held her 2017 College Signing Day, hosted by Nick Cannon, at New York City’s Public Theater. Continuing in the tradition she started in 2014 as a part of her Reach Higher initiative for the first time after leaving the White House, Obama addressed about 300 high school students, mostly first-generation, in the audience.

Donning a gray Princeton Tigers shirt to represent her alma mater, Obama told the audience that though she may not be first lady anymore, her priority lies with education.

“This event has grown from just a few dozen events in a handful of cities where we first started to this nationwide celebration we’re having in just four years,” Obama said. “So one of the reasons that we’re doing this, my presence here today is no accident because I might not live in the White House anymore, but Barack and I are going to keep on celebrating you all and supporting you and lifting you up no matter what house we live in.”

Obama discussed the transformative power education had on her life as she went from a “working class kid” from the south side of Chicago to a Princeton graduate with the tools to impact the world at her fingertips. She told the students that she wants them to realize the importance of their accomplishment and celebrate their college acceptance.

“We gotta celebrate students going to college bigger than we celebrate the Final Four or the Super Bowl,” she said. “This is important. The number of acceptance letters you get should be more important than the number of followers you have on social media.”

She also told students to not be discouraged when they encounter struggle in their pursuit to education. The former first lady encouraged them to find a support base early, whether it be in the academic center, a club or a study group. She said that will be a major key to the future college students finding success.

“Once you find that community, and you have to find your community in college and it may take some time, you’re gonna get this thing. You are gonna soar and you’re gonna continue to make us proud because we need you prepared to be the next generation of leaders,” she said.

And the auditorium was full of future leaders indeed. Teens who were scholars, activists, entrepreneurs, artists and more graced the stage and filled the audience.

And in true Obama fashion, this College Signing Day was full of magical melanin. BLSYW step team, the black, all-girls squad from Baltimore featured in the forthcoming documentary “Step,” opened up the event, incorporating one of Obama’s most celebrated sound bytes in their performance: “When they go low, we go high, raise our standards to the sky.”

Other performaners included a young lady who performed a poem as prolific writer and former slave Phillis Wheatley and a young duo who sang their an original composition on the ills of slavery to the tune of Rihanna’s “Consideration.”

Obama wrapped up her comments by urging the high school students to remember the advice they were given and the spirit they felt throughout the event.

“There’s stuff going on out there and thankfully we have you to take up that challenge. Right? You’re gonna be the next leaders of tomorrow. So don’t ever get discouraged. Remember this day… We need you, alright? And I couldn’t be more proud of you.”