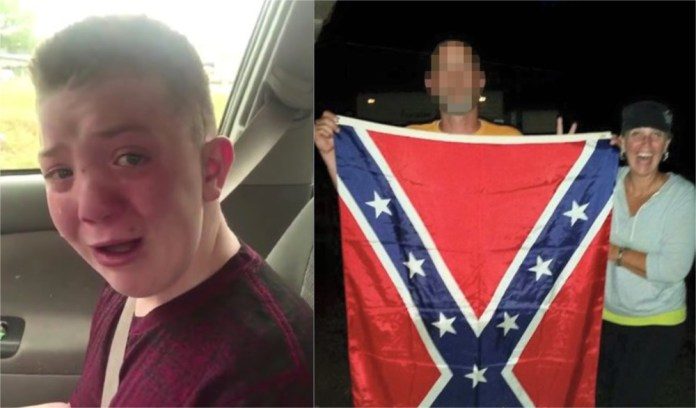 Keaton Jones went viral on Facebook with a tear-filled video in which he spoke openly about being bullied, but now, his mother is facing a reckoning for her own hateful tendencies.

The Tennessee middle schooler received massive support after the video went viral, so much so that people donated $55,000 to his family, and several big-name celebrities have reached out to Keaton to invite him to premieres and other events.

But before Keaton’s mother, Kimberly Jones, posted the video of her son in tears, she didn’t bother to clean up her own Facebook page, which shows her to be a Confederate flag-loving racist.

Some intrepid people on the internet looked a little deeper into her Facebook past and found posts railing against Black people and posts lauding the Confederate flag. At one point, she even posted the following:

“Dear butt hurt Americans, If you aren’t bleeding, no bones are sticking out & you can breathe, STOP crying! For the love, some folks clearly never picked a switch. And before y’all start talking to me about metaphorical, emotional, financial or historical blood & brokenness, Don’t. Join a group.”

This from a mother whose son went viral because of bullying.

MMA fighter Joe Schilling also posted on Instagram showing a conversation he had with someone claiming to be Kimberly Jones in which she said, “What happened to us whites sticking together and helping one of another against the predator?”