DefenderNetwork.com
Home NEWS National This Morehouse grad is running for Mayor of Birmingham 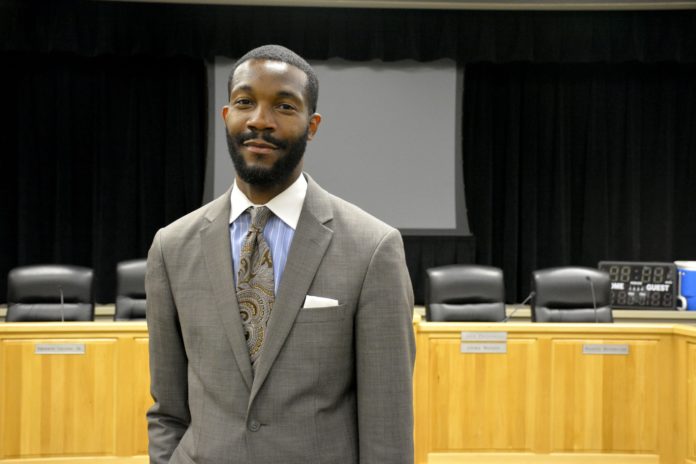 The 35-year-old is the newest rising political voice in Birmingham, Alabama, a city remembered for its deep and impactful connection to the civil rights movement.

Birmingham is now grappling with its future, as a site for new economic development and cultural rebirth.

Woodfin, a Morehouse grad, trained lawyer and former school board president, is challenging incumbent Mayor William A. Bell Sr. this summer.  Woodfin says the “old guard” should step aside so a new generation can step up to the plate.

He has recently caught the attention of The Collective PAC, a new political action committee recruiting and supporting the next generation of black candidates at every level.

Woodfin says his personal background has really prepared him to lead.

“There were never less than eight people in our home growing up,” said Woodfin, a Birmingham native. “I dealt with every temperament and every personality in the world. It taught me patience and how to be a great listener.”

He also learned how to deal with tragedy following his brother’s death due to gun violence.

Woodfin spoke with theGrio.com about his love for his hometown and the challenges he’s faced as a young black man running for political office.

TheGrio: What inspired you to run for mayor in Birmingham?

Randall Woodfin: I’ve been in and around City Hall probably since 2003. That was the year I finished college, so about 14 years. I’ve been a lawyer for the city since 2009. And in that space, I’ve seen up and close the problems that our city has. It’s just not in a good space.

Someone approached me and said, ‘Hey. You should consider running in 2021. The seat will be open. You’ll have all the support you want. You’ll have all the resources you need.’ And my response was, ‘I’m unaware of any fire truck that goes through a scene, once the house is totally burned down. The kitchen is on fire now.’ And in my opinion, something needs to be done now.

TG: What is the dynamic like running against the political establishment?

RW: It’s an uphill battle. But it’s a worthy uphill battle. Here’s the deal with running against an incumbent. Even when people like you and/or  want to support you, they’re hesitant to give. Not because they necessarily support the other person. They definitely support you.

TG: Although Birmingham is considered to be a liberal city, are you still concerned about meeting opposition from conservatives?

RW: As a candidate, no. I am concerned about becoming mayor and there’s no home rulein the state of Alabama. So in regards to things you want to accomplish you can’t do it through a city ordinance.

We have a murder issue in our town, a violence issue. People are harming people via gun violence here. My own brother was murdered. Next month it will be five years. And in Alabama people are wanting to do away with a pistol permit so you can just ride around with a pistol and you don’t need a permit.

The problem with that in an urban area like Birmingham is people who are riding around without a pistol permit are the people who are actually committing crimes and hurting people.

TG: I’m so sorry to hear about the passing of your brother.

RW: It’s too common though. There were 104 families who experienced the same thing my family experienced, last year.

TG: What challenges or advantages have you had as a young black man running for political office?

So when you go up against people who have held onto leadership mantle for 30 and 40 years, the unfortunate part of that is they don’t always invest in, groom, nurture, shepherd us. And I’m defining ‘us’ as Generation X and Generation Y.

They hold onto a leadership mantle and that creates one of two things. Either an overwhelming amount of selfishness that’s coupled with things haven’t gotten better for people they’ve gotten worse. Or zero transparency and just ineffective and inefficient government and nobody’s winning.

TG: There’s been a lot of talk of political resistance in the era of Trump. Does what’s happening on a national level inspire the kind of impact you want to make?

RW: Full motivation. I’ll tell you, I’ll never forget this. I did a fundraiser and a gentleman says, ‘Look. I don’t know you. And I don’t live in your hometown. So why should I should be motivated and/or care about giving to your campaign?’ And I said, ‘Well, look, we just completed a presidential race where all the negative things you could think about were exposed about what’s really happening in America.”

And this is what I told him and I repeated this in front of the crowd: The last time I checked, the president of the United States doesn’t appoint police chiefs. A mayor of a city does. And if you’re going to fight at the federal level for police reform, you may want to start at the local level because you want to hold your mayor accountable for who your police chief is because the mayor and the police chief are going to be responsible for police interaction.

You’ve got a problem at the federal level as it relates to access to healthy food and all the issues around health. But on the food front, your mayor is in a position whether it’s through tax incentives to leverage resources to be intentional about bringing grocery stores to urban areas where we don’t have access to healthy foods. As it relates to supporting your small business, who’s in a better position? Your mayor not your president. So everything people are fighting for and we get so emotionally attached to our presidential elections and our presidential outcomes.

What I’m telling people is we may want to tap into some of that emotion on a local level. Because not only is that where you next group of leaders are coming from for a progressive agenda or progressive movement to help you.

TG: If elected as mayor, what changes are you hoping to bring to Birmingham?

RW: One is a sense of progress. What we’ve done over the last years is put a lot of energy in commemorating what happened in the 50s and 60s. And I respect that. I honor it.  But I would also like to see us be intentional and as aggressive about what are we doing in the present, and for the future as it relates to supporting people that actually live in the city.

One thing I want to accomplish is bringing jobs to my city. I don’t think nobody else is in a better position than the mayor to be intentional about industry recruitment, job recruitment, and making sure that people in the city have employment opportunities and can work.

Another thing I want to make sure our children have educational opportunities.

And I want to address, tackle, and fight crime in a holistic way. Not just more officers on the street but the best way to fight crime, as I said earlier, is to put people to work.

And lastly I would say, investing and supporting small businesses. Because they’re the backbone of our tax base. And if they’re not supported, if their process of interacting with City Hall is not efficient or professional, they leave. So we have to do a better job.